You can't make this up.

We've no doubt that there are people in the world that have some 'unfortunate' but funny names - Seymour Butts and Hugh Jass from the Simpsons instantly come to mind - but it's very seldom that a news story breaks that does these incredible people justice.

In what could be the most ironic news update of all-time, a teenager named Bud Weisser was recently arrested after being caught trespassing at the Budweiser Brewery in St. Louis. 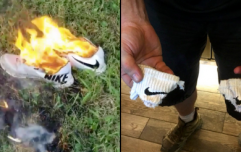 END_OF_DOCUMENT_TOKEN_TO_BE_REPLACED

Police say Bud Weisser entered the secured area at around 6pm on Thursday, and refused to leave when officers discovered him on the premises. Weisser was then taken into police custody and charged with trespassing and resisting arrest.

We wonder when Bud was taken into custody, did the police ask 'Wasssssssuuuuup'?