The 22-year-old sued the Virginia school for sexual discrimination six years ago. The court has now ruled in his favour

Transgender student and trans rights activist, Gavin Grimm - who took his school to court after they denied him access to the boy's toilets - is set to be paid a huge sum.

Grimm, now 22, was just 16 when he decided to sue the Gloucester County School board for discrimination. Now, six years on and many more feats of activism later, he is set to be paid approximately $1.3 million in legal fees.

A school board in Virginia has agreed to pay $1.3 million in legal fees to resolve a discrimination lawsuit filed by Gavin Grimm, a former student whose efforts to use the boys’ bathroom put him at the center of a national debate over transgender rights. https://t.co/QiEchkweHJ

Grimm identifies as a male and invoked the civil rights law, Title IX, as well as the Equal Protection Clause of the 14th Amendment when he was denied entry to the male bathroom. The laws basically prohibit schools from discriminating "on the basis of sex". Noting the language in the legislation, he dubbed the requirements as "humiliating".

Since then, however, the former Virginia student has taken Gloucester County School to trial twice, winning both times. The latest hearing concluded in June.

I was barred from the bathroom at my highschool 7 years ago, when I was 15. 6 years ago, at 16, myself with the @ACLU/@ACLUVA filed suit in response to that discrimination. Twice since I have enjoyed victories in court, and now it's over. We won.

Following the high-profile case, Grimm went on to be a notable activist within the LGBTQIA+ community; one man even paid for his college tuition following his commendable efforts as a young teen. 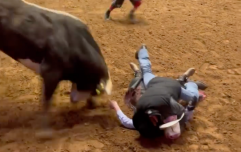 END_OF_DOCUMENT_TOKEN_TO_BE_REPLACED

The #IStandWithGavin trend has been regularly circulated on social media over the past few years and was backed by the American Civil Liberties Union (ACLU).

"The court found that what they did was wrong and it was discrimination and it was not going to go without consequence, and I think that’s fantastic."