If you didn't already know, it's Father's Day today.

It's not too late to whip up a homemade card or note wishing your dad well. Failing that, maybe even just offer him a cup of tea and a smile.

END_OF_DOCUMENT_TOKEN_TO_BE_REPLACED

We've seen epic stories and photos online from people everywhere praising their dad and sharing how they're spending the day with their favourite man but some young kids have put us all to shame.

One father shared a picture of the breakfast his children surprised him with and it has to be said, they went to a lot of effort. We can confidently say that we've never seen a meal like this before.

Reddit user CaptainFiddler uploaded a snap of the meal they provided him and it's guaranteed to give you a smile. 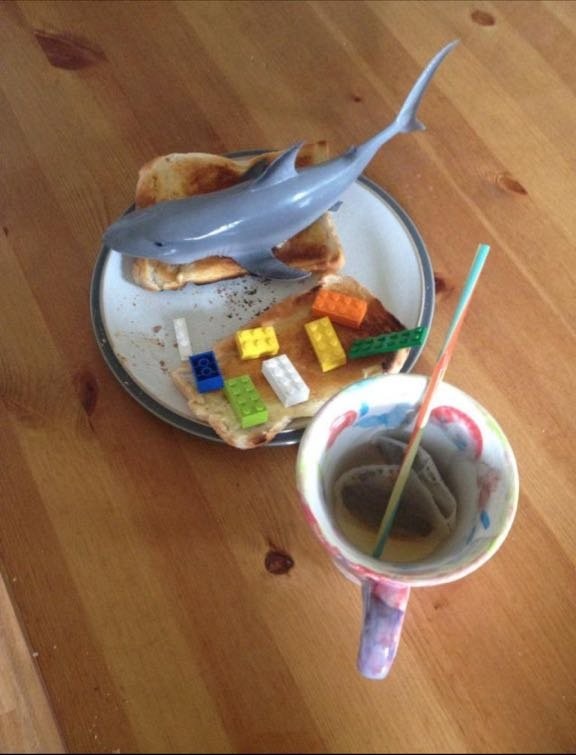 Ah yes, a sumptuous feast of shark on toast accompanied by an exquisite side of Lego, washed down by a mug of cold water with two tea bags and a straw.

You really can't beat it.

After all, they do say that it's the effort that counts.

popular
Travis Barker’s daughter shares picture of Blink-182 star in hospital bed - tells fans to ‘send your prayers’
Angela Rayner humiliates Dominic Raab over opera reference
Celebrity Juice axed by ITV after 14 years as Keith Lemon pays tribute to 'the longest most fun party'
'You're disgusting': Prince William roars at photographer who was 'stalking' his family
Here's why people are currently debating if online teabagging is sexual assault
Jasmine Burkitt death: BBC reality TV star dies aged 28
Bette Midler wants the US to ban Viagra because it’s ‘God’s will’ to have a ‘limp d**k’
You may also like
News
McDonald’s has removed the ‘best item’ on its breakfast menu for good
Uncategorized
Pizza could be a better breakfast than sugary cereal, says expert
Food
Heinz baked bean smoothies are now a real thing
Food
One in 10 Brits think bacon isn't essential to a Full English
Food
Eating challenge: we tackled London's biggest breakfast
Next Page