A chippy and some evening entertainment, courtesy of Mr Williams' window

A frustrated homeowner has put up a fence in front of his house to prevent people from sitting on his windowsill while eating fish and chips bought from the chippy next door.

END_OF_DOCUMENT_TOKEN_TO_BE_REPLACED

Northumberland resident Stephen Williams, 45, erected a 4ft-high picket fence in a bid to protect his living room window from the prying eyes of hungry fish and chip shop customers.

Though his house also used to be Victoria House Fish and Chips, Williams had to close in 2019 and convert the space into a living room.

Mr Williams used to own a chippy next door/Via SWNSBut the customers have not taken kindly to the move and are allegedly angry that they now have to walk on the road to get their chippy dinner.

"The chip shop has been there for years. Whoever bought the house next door must have known that. Sticking a fence up is very petty," said one hangry potential customer.

"He didn't mind people walking on the path when they were coming into his shop and lining his pockets. Now all of a sudden he wants privacy. It's unbelievable."

The fence extends 2ft into a lay-by that customers use to park their cars before picking up their food - which has not earned him the adoration of his neighbours.

But not all of the residents are angry with Williams, with one saying: "Stephen is sick and tired of people eating their chips right outside his home.

"Sometimes school kids queue outside and can go right outside his living room window.

Residents are not happy with his new build/Via SWNS

"They are basically sitting on his windowsill stuffing their faces while he's watching TV. I don't agree with the fence but I have some sympathy with him." 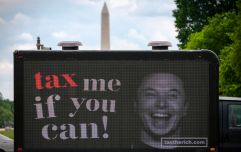 END_OF_DOCUMENT_TOKEN_TO_BE_REPLACED

Cllr Gordon Castle said: "He claims to have deeds showing ownership of where his fence now sits.

"I can hardly believe he has gone ahead with this before any resolution with county highways."

Williams has said that people stare through their windows while eating their fish and chips.

"We just want some privacy. The land is rightfully ours," he said.

"Most people wouldn't want people using their land as a footpath and neither do we. We just want to protect our property."

popular
Watford staff unhappy with Ben Foster's commitment to vlogging on club time
Nigel Farage says another IRA slogan in latest Cameo trick
Mum who drove into Insulate Britain in rage says 'I just gave them a nudge'
Passengers who allegedly filmed rape of woman on train unlikely to be charged
Everton footballer has bail extended until January
Pilot who crashed plane that killed Emiliano Sala was ordered not to fly
Cold War Steve: How the Banksy of Twitter turned Covid angst into art
You may also like
Food
People are shocked to see price of Fish at Gordon Ramsay's restaurant
News
UK’s oldest man says key to a long life is a chippy tea every week
Food
The 50 best chippies in the UK have been revealed
Food
A Scottish fish and chip shop has been named one of the best food experiences in the world
News
The UKIP revival starts here: How to save the party when the chips are down
Next Page