Daredevil Alex Harvill has died after a motorcycle jump gone wrong. He is survived by his wife and two children, one of which was born just last month.

Yesterday Harvill was practising to break the world record for the longest motorcycle jump, which Robbie Maddison currently holds for a 351-foot jump he completed in 2008. 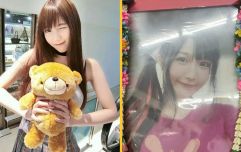 END_OF_DOCUMENT_TOKEN_TO_BE_REPLACED

"We regret to report today at our first event of the airshow - the Guinness World Record Jump Attempt, Alex Harvill was injured during his warm-up before the jump and has been taken to the hospital.

"We do not have more information at this time regarding the incident. Our hearts are with Alex and his family."

"Grant County Coroner Craig Morrison confirms the death of 28-year-old Ephrata resident Alex Harvill who died after crashing his motorcycle while performing a practice jump at the Grant County International Airport this morning.

END_OF_DOCUMENT_TOKEN_TO_BE_REPLACED

"His family has been notified. Coroner Morrison's staff will conduct an autopsy on Friday to confirm the cause and manner of death, which is normal procedure.

"Our deepest sympathies go out to Alex's family, friends and loved ones."

Record holder Robbie Maddison also paid tribute to the fallen biker on Instagram, sharing his thoughts and prayers with the family.

popular
Groom shoots friend dead by mistake after firing shot in celebration at his wedding
The JOE Friday Pub Quiz: Week 300 - the Triple Century
Horror as Primark shoppers witness two-week-old baby ‘fall from top of escalator’
'Dinosaur lady' wins internet with baffling Question Time remark on rail strikes
Johnny Depp's lawyer Camille Vasquez annoys fans amid rumours she may defend David Dobrik
Stranger Things fans think Will Byers is evil ahead of season 4 part 2
Seven awful films rated higher than Pogba’s “Pogmentary” on IMDB
You may also like
Entertainment
There are multiple deaths in Stranger Things season 4 Vol 2, says cast member
Entertainment
Riverdale actor killed his mother so she didn't have to witness his plot to assassinate Justin Trudeau
News
Elephant tramples woman to death then turns up at funeral and attacks her corpse
News
TikTok star Cooper Noriega dead at 19
News
Man falls into 1,440°C vat of molten iron causing half of his body to melt
Next Page