As if anyone needed any reminder that cancer is one cruel bastard of a disease.

Vinny Desautels, who is 7-year-old and from Roseville, California, has spent two years growing out his hair to raise money for other kids battling cancer.

The little lad ended up growing his hair 13 inches, and then had his mum cut it off to donate it all to make wigs for child cancer patients.

"Even though he was teased throughout the 2 years of growing his hair out, it didn't deter him from his mission to help a child in need," Vinny's grandparents Sue and Ron have explained.

One day last month, Vinny came home from school complaining about a pain in his knee, and later that evening his parents noticed a big lump on the lad's hip. They took him to A&E, where a large growth was discovered on Vinny's Iliac bone.

Then, the following day at an optician's appointment for a swollen eye - believed to have been caused by allergies - a series of tests uncovered a malignant mass on Vinny's eye. "It is stage 4 aggressive cancer," his dad Jason told Fox News. 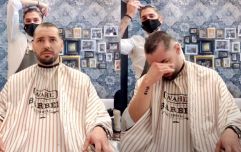 Barber shaves off own hair in solidarity with man with cancer

END_OF_DOCUMENT_TOKEN_TO_BE_REPLACED

Now Vinny's grandparents have now set up a GoFundMe campaign to raise money for the boy's treatment - at the time of writing, $73,000 had been collected in just over a week.

"Vinny is taking all of this like a brave little turd," they write on the campaign page, adding:

"There are many more tests ahead and they're in the hospital for an undetermined amount of time. We have started this Go Fund Me account to ease the burden of his parents, Jason and Amanda.  Amanda is six months pregnant and Jason is a combat veteran.

"Over the next days, weeks, and months ahead they will need to be at countless doctor appointments, hospital stays and surgeries.   As you can imagine the normal costs of  every day living...such as rent, food, gas, car, etc...the medical costs can be astronomical. This will enable Vinny's parents be able to concentrate on Vinny getting well and fighting this wicked disease called cancer." 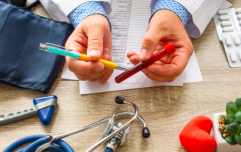 END_OF_DOCUMENT_TOKEN_TO_BE_REPLACED

As doctors now try to identify precisely what type of cancer Vinny is fighting, his mum Sue wrote on Facebook: "We were heartbroken to get this diagnosis. With that said, I would like to humbly thank everyone for their kind words of encouragement. We are a close family, and we are fighting this together."

popular
Man with world’s biggest penis says Oscar winner slid into his DMs
'Super recogniser' draws 'accurate' modern Maddie McCann to help police find her
Bride faints on groom, vomits and gets pooed on during ceremony
Mum in jail for murder pays tribute to son, 6, killed by his dad and new girlfriend
'I did three grams of coke during a game': Inside football's problem with Class A drugs
Bride considering putting unvaccinated guests on 'anti-vax' table at wedding
Chilling video shows moment step mum tried to get away with murdering boy, 6
You may also like
Charity
Guy raises thousands for Movember with dick-shaped running routes
News
Italian doctor known as 'Dr Magic Flute' allegedly offered to have sex with patient to 'cure' cancer
Entertainment
Radio 1 DJ and I'm A Celeb star Adele Roberts diagnosed with cancer aged 42
Entertainment
George Alagiah taking break from BBC News after cancer spread
News
People born in April are officially the sexiest, study finds
Next Page