By now, we've heard all about how certain batches of the new £5 note are worth considerably more than just a fiver.

Weeks after the new note came into circulation there were reports that some of them - with serial numbers beginning with the characters 'AA01' -  were selling for up to £200 on Ebay.

While collectors have almost certainly snapped up the majority of those AA01 fivers by now, we told you a few weeks back about four more of the new notes that were worth *much* more than just £200.

Micro-engraver Graham Short created miniature engravings of Jane Austen on four of the new £5 notes, travelling to four different locations within the UK (one in England, one in Wales, one in Scotland and one in Northern Ireland) to spend them. The painstaking designs have been etched next to the picture of Big Ben and Winston Churchill and are accompanied by quotes from Austen's novels. The images of the Pride and Prejudice author's face are also barely visible to the naked eye but can be seen in bright light.

Up until Thursday, only one of them had been identified with the second now turning up inside a Christmas card. The person that's found the note has decided to remain anonymous, but it's known that the discovery was made in Scotland.


Short, who once famously engraved the Lord's Prayer on to the head of a pin, said recently that he decided to use Jane Austen as the inspiration for his design when he discovered it was the 200th year of her death. 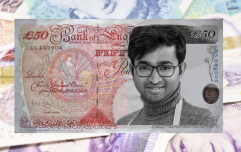 9 deserving contenders for the face of the new £50 note

END_OF_DOCUMENT_TOKEN_TO_BE_REPLACED

"I'm always looking to do something different and as soon as I saw the new £5 note I thought 'wouldn't it be good if I could engrave something on it?'" the 70-year-old is quoted as saying in the Daily Mail.

"I didn't know what but then I found out it was going to be the 200th anniversary of Jane Austen's death and her image is also going on the new £10 note, so it ties in nicely with that.

"I've no idea how much they will be worth but £20,000 is a conservative estimate - previous pieces I've done have been insured for more than £50,000 and the last work, the portrait of Her Majesty The Queen on the eye of a needle fetched £100,000."

Anyone who finds one of the remaining fivers should contact the Tony Huggins-Haig Gallery in Kelso, Roxburghshire, which launched the project.

Get checking those wallets.

You may also like
Comment
Reaction of the rich to the Notre Dame fire teaches us a lot about the world we live in
News
Banks to be banned from charging excessive fees for overdrafts
Entertainment
This is how much money Dani Dyer will earn when she leaves the Love Island villa
News
Is Spotify the key to determining the country's spending habits?
Entertainment
A new scam targeting Netflix users may leave people quite seriously out of pocket
Next Page