The players let off flares as they celebrated promotion

Leeds United have been charged by the FA over their promotion celebrations at Derby.

In their first game following clinching promotion to the Premeir League, Leeds beat Derby 3-1 in front of an empty Pride Park.

The players then celebrated with flares after the game.

"It is alleged that the club failed to ensure its players and/or officials conducted themselves in an orderly fashion as pyrotechnic devices were used following the conclusion of the fixture," an FA spokesperson said in a statement.

The club has now been charged by the FA, with them having until September 3rd to respond.

Prior to the game, the Derby plays had given the league champions a guard of honour. 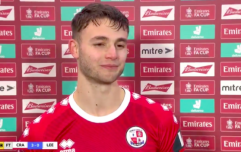 END_OF_DOCUMENT_TOKEN_TO_BE_REPLACED

The fixture between Leeds United and Derby County has taken on a new significance following 'Spygate', where Leeds staff were caught watching Derby's training sessions.

Leeds' director of football Victor Orta was even seen celebrating with a pair of binoculars in the stands at Pride Park as the players partied on the pitch.

Leeds secured promotion back to the Premier League for the first time in 16 years, when West Bromich Albion lost 2-1 to Huddersfield Town on July 17th. Beating Derby then cemented them as winners of the Championship.

They had been rejuvenated under Argentine manager Marcelo Bielsa, though they failed at the final hurdle during his first season in charge. Despite being in the top two for the majority of the 2018/19 campaign, they slipped down into the play-off following back-to-back defeats by Wigan and Brentford. They then crashed out to Derby County in a dramatic play-off semi-final that ended 4-3 on aggregate.

Bielsa's side suffered no such problems last season however, managing to maintain momentum even with the break caused by the coronavirus pandemic, and eventually finished ten points clear of second-placed West Brom.