Valentine's Day is coming, which means you need to buy into the capitalist culture and purchase an item to show how much you love your significant other.

You could get flowers, or chocolates, or take them out for a fancy meal.

Or, you could get them a big sausage wrapped in bacon. Yes, really.

Are you ready for our Love Sausage? Heart-shaped, lightly-truffled, wrapped in bacon and in store tomorrow. Say it with sausages – tag who you’ll be sharing your Love Sausage with this Valentine's Day! #MyMarksFave pic.twitter.com/VPQi4ENnsn

Marks and Spencers have revealed their 'Love Sausage' - under most circumstances, that sentence would usually end with someone being arrested and added to some sort of register. But this time, it is a "heart-shaped, lightly-truffled [sausage], wrapped in bacon" that the retailer has launched in time for Valentines Day.

The image shown on Twitter even show two fried eggs in the middle, though they apparently do not come with the Love Sausage.

It has gotten the reaction you would expect on social media. 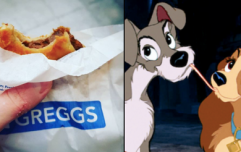 You can officially book a table at Greggs for Valentine's Day

END_OF_DOCUMENT_TOKEN_TO_BE_REPLACED

The Love Sausage goes on sale February 8, and costs £5.

2018 was a big year for pigs-in-blankets - Aldi launched foot-long and triple-decker variants for Christmas, and a pub in Manchester posted a vacancy for a professional pigs-in-blankets taster.

popular
Jake Paul accused of sexual assault by TikTok star Justine Paradise
People fighting over name of game where you knock on someone's door and run away
Man faces three years in jail in Dubai for legally smoking marijuana in his own country
Flatpack expert charges people to assemble Ikea furniture after job loss
QUIZ: Can you get 20/20 in this desperately tricky capital cities quiz?
Spurs and City fan groups issue joint statement criticising ticketing for Carabao Cup final
Covid lockdown 4: Could it really happen and how can we prevent it?
You may also like
Life
13 cringe Valentine's Day posts you're going to see on Facebook today
Life
Poundland is now selling engagement rings because you can put a price on love: a quid
Life
Grieving man has lunch with his wife's ashes on Valentine's Day
Entertainment
Coronation Street viewers were so confused by a bizarre deal on the show yesterday
Sport
Manchester City's request for Valentine's Day poems goes as badly as you'd expect
Next Page