Netflix has added one of Marvel's best and most underrated films

Our, er, Netflix-Sense is tingling

Now that you've seen Avengers: Endgame sixteen times in the cinema, you might want to go back and rewatch some of the previous Marve Cinematic Universe entries - and conveniently, Netflix has just added one of the most underrated.

Spider-Man: Homecoming, the first MCU film to focus on Spidey, came out in 2017 and sparked pure adoration for Tom Holland — the third Peter Parker since the turn of the millennium, surpassing Tobey Maguire and Andrew Garfield. 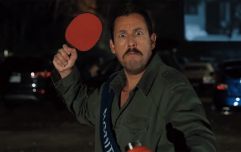 END_OF_DOCUMENT_TOKEN_TO_BE_REPLACED

And yes, Spider-Man: Into The Spider-Verse has since come out and claimed the title of Official Best Spider-Man Film of All Time. But Homecoming is pretty damn great.

The sequel to Homecoming, Far From Home, is coming later this summer - complete with Jake Gyllenhaal as fishbowl-headed classic Spidey villain Mysterio - so now is the perfect time to reacquaint yourself with your friendly neighbourhood web-slinger.


popular
QUIZ: Can you identify these capital cities on a map?
Manchester United player ratings from Paris Saint-Germain win
QUIZ: Name all 50 of these 2000s Champions League players
The Boys' showrunner says the Marvel films are 'dangerous' to society
QUIZ: Can you identify these US cities on a map?
Jurgen Klopp questions Jamie Carragher over centre-back transfer comments
Liverpool players "can't sleep" after Virgil van Dijk injury blow