A new generation is set to be scarred for life

The 1978 animated movie Watership Down has traumatised multiple generations of kids.

What looks like a sweet cartoon about talking bunnies is actually a devastating allegory about war, death and freedom. It is basically Apocalypse Now, but with rabbits. 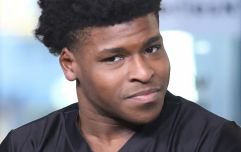 END_OF_DOCUMENT_TOKEN_TO_BE_REPLACED

Despite being a staple of afternoon TV for several decades, it features more blood and gore than many horror movies.

Sam Smith will also be recording an original theme for the series.

The first images have now been released, and it looks pretty different from the traditionally-animated original version.

Adapted for the screen by Tom Bidwell (My Mad Fat Diary), Watership Down uses Richard Adams’ bestselling novel as its source to bring an innovative interpretation to the beloved story. Set in the idyllic rural landscape of southern England, this tale of adventure, courage and survival follows a band of rabbits on their flight from the intrusion of man and the certain destruction of their home. Led by a stout-hearted pair of brothers, they journey forth from their native Sandleford Warren through the harrowing trials posed by predators and adversaries, towards a promised land and a more perfect society.

Sam Smith said in a statement announcing his involvement:

“I am so excited and honoured to be a part of this new adaptation of Watership Down. This story is so powerful and timeless, and it has been thrilling to work with [director] Noam Murro and his team and the incredible Steve Mac on this song for it. I hope everyone loves it as much as I do.”

Watership Down will be shown on BBC One as two special feature-length episodes this Christmas.