Peter Kay will embark on his first stand-up comedy tour in eight years next year.

It was announced last week that the Bolton comedian will perform a host of dates across the UK and Ireland throughout 2018 and early 2019, with tickets going on general sale on Sunday morning. 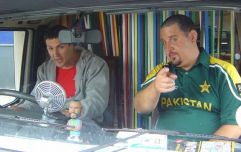 END_OF_DOCUMENT_TOKEN_TO_BE_REPLACED

Ahead of tickets going on sale, the 44-year-old caused utter chaos on The Jonathan Ross Show, clambering over the set and inviting member from the audience to join fellow guests on the show in the green room.

His appearance on the show, which aired on Saturday night, saw Kay begin by climbing through railings in the set's background and attempting to rearrange its 'London-centric' skyline.

Having eventually been coaxed to the sofa, Kay then revealed he had -unbeknown t0 Ross - offered a 'meet-and-greet' with the chat show host as a raffle prize at a Christmas fayre. Seconds later, he invited three members of the studio audience on stage, allowing them to sit on the sofa.

Winners Mary, Anne and Philip later went backstage to meet other guests on the show.

popular
Scotland international rugby star Siobhan Cattigan dies aged 26
Elon Musk shares 'evidence' we are actually living in a simulation
A definitive ranking of every swear word from worst to best
Woman wins millions after suing mum's GP for allowing her to be born
Lovely Bones author apologises to exonerated man who spent 16 years in prison for her rape
Here's how to see who's been taking screenshots of your Instagram Stories
Nasa warns 'concerning' asteroid will break into Earth's orbit in a week
You may also like
Entertainment
The hilarious outtakes from Peter Kay's Car Share are guaranteed to make you laugh
Entertainment
The new episode of Peter Kay's Car Share is getting fantastic reviews
Entertainment
OFFICIAL: Peter Kay's Car Share will return to TV in May
Entertainment
Poor Peter Reid falls for internet hoax and announces Peter Kay has died (he hasn't)
Entertainment
Peter Kay has cancelled his comeback tour
Next Page