WATCH: Peter Crouch moshes out in the pit during Kasabian's Isle of Wight festival set

National treasure and full-time loveable man Peter Crouch popped up at the Isle of Wight festival this weekend during Kasabian's headline set. 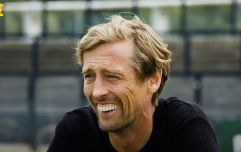 END_OF_DOCUMENT_TOKEN_TO_BE_REPLACED

Where did he pop up exactly?

In the moshpit. That's where. Of course he did.

I know, I know. You'd rather he was over there in Russia feeding Harry Kane with knock downs and doing the robot to his heart's content after beating Tunisia. We all would. But this is definitely the second best option.

Let me prove it. Feast your eyes on Crouchy absolutely going for it: 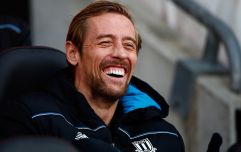 END_OF_DOCUMENT_TOKEN_TO_BE_REPLACED

What a man. How does he not have a knighthood? @TheQueen, give him one now.

Poor Serge Pizzorno even had to give him a special shoutout during the "get down low" segment in their 'Fire' because he could still point him out from the stage.

Why does 'Fire' now have a get down low segment during the bridge? Don't ask. I have no idea.

Still, it's nice to see that Crouchy also had the chance to enjoy a bit of down time, soaking in the good weather and free drinks in the VIP area.

Inevitably though once the football came out, his head was turned.

Wish you were here Peter, jumping around the bar with us when Kane scores a double hattrick against Panama.