Parker sadly passed away on March 30

Tom Parker's wife has revealed the date of her later husband's funeral while also urging fans to line the streets for a "last goodbye."

END_OF_DOCUMENT_TOKEN_TO_BE_REPLACED

The Wanted singer Tom Parker died on March 30 after a battle with a form of brain cancer called glioblastoma. While Parker had fought this disease since his diagnosis in October 2020, fans and friends were heartbroken to learn the news earlier this year.

"Thank you to everyone who has supported in his care throughout, he fought until the very end. I’m forever proud of you," his wife Kelsey said on Instagram shortly after his passing.

END_OF_DOCUMENT_TOKEN_TO_BE_REPLACED

On April 13, Kelsey announced that the funeral would be held today, April 20, at the Saint Francis of Assisi Parish Church on Greencourt Road in Petts Wood, Queensway, South-East London. The funeral will begin at 10:45 but Kelsey urged fans via Instagram to arrive at 10am, where they can watch the service through large video screens.

"Thomas Anthony Parker. There will be a private celebration of life on Wednesday 20th April," Kelsey wrote on the social media platform. “We know many of you would like to pay your respects as well, so would love for you to join us in Petts Wood from 10am." 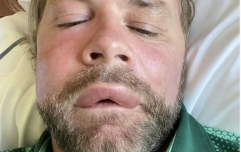 END_OF_DOCUMENT_TOKEN_TO_BE_REPLACED

She continued: “It would be beautiful to have everyone line the route as we head to our private service.

“You are then welcome to join us outside the church for the duration where the service will be relayed on screens."

Should you wish to attend the funeral, the address provided is Queensway, Petts Wood BR5 1DG.

popular
Robin Williams' wife shares reason why he killed himself
Woman arrested after husband caught her on video allegedly using drain cleaner to poison him
Fans shocked by Tommy Lee's extremely X-rated post on Instagram
‘Time traveller from 2090’ warns humans of worst event in history in coming days
Groom shocks wedding by playing video of his bride cheating with her brother-in-law
Antonio Conte 'banishes' four Tottenham players from first-team
Emergency service workers took photographs of Kobe Bryant’s body 'for a laugh’
You may also like
News
Elephant tramples woman to death then turns up at funeral and attacks her corpse
News
The school children killed in Texas shooting will be buried in unique caskets free of charge
Life
1.5 million men would wear a suit to bury their pet- would you?
Fitness & Health
Man turned to compost in eco-friendly funeral before being scattered across the ground
News
'Hero' Ukrainian soldier who blew himself up on bridge honoured with funeral in hometown
Next Page