If this theory is right, it would make the plot twist in The Sixth Sense look totally obvious by comparison.

There has been a lot of talk about the upcoming Batman v Superman film. Since their inception, fans have wanted to see the two face off against each other.

END_OF_DOCUMENT_TOKEN_TO_BE_REPLACED

While we've seen it in the comics, this is the first time we'll get to watch DC's two biggest heroes feature in a true Hollywood blockbuster.

But if this fan theory from Total Spoiler is correct, then we're all in for a treat beyond our already sky-high expectations. We have no idea if it's true, but the following contains either spoilers or nonsense. We just don't know yet.

Put simply, the theory is this: The Man of Steel films take place in the same universe as the Dark Knight trilogy, and Christian Bale will return as Bruce Wayne and Batman because Ben Affleck was never playing Bruce Wayne in the first place.

We know it sounds like the ramblings of someone not quite in touch with reality, but there is some method to the madness here.

First of all, there is precedent for this sort of carry-on in Batman Begins, when Liam Neeson was listed as Henry Ducard and Ken Watanabe was set to play Ra's al Ghul.

Watanabe's character ended up being a decoy to Neeson's real Ra's al Ghul, and there may be a similar thing happening here with Ben Affleck.

So far we've not actually seen anyone in any of the trailers address Ben Affleck's character by name. So if he's not Bruce Wayne, then who is he?

END_OF_DOCUMENT_TOKEN_TO_BE_REPLACED

Well, the theory goes that Affleck is actually Slade Wilson - aka Deathstroke. For those who don't know, Deathstroke  is a mercenary who usually fights as a villain in the DC universe.

Like Bruce Wayne, Wilson has a loyal butler who assists him along the way named William Wintergreen. Jeremy Irons originally seemed like a strange casting choice for Alfred Pennyworth - but what if he was Wintergreen?

Apparently in the 'Outsiders' comics, Wilson actually takes up the mantel as Batman. And you have to agree that Affleck's caped crusader looks pretty similar with his increased muscle mass and shortened ears: 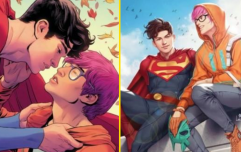 END_OF_DOCUMENT_TOKEN_TO_BE_REPLACED

So why is Wilson pretending to be Batman? Simple: Bruce Wayne wanted to retire at the end of the Dark Knight Rises, but Gotham is still in trouble so many years later and needs him. Instead of returning, Wayne uses his immense wealth to hire the ultimate mercenary - Deathstroke.

By supplying Wilson with Batman-type gadgets, Bruce Wayne can defend the city without having to actually do much. From Wilson's point of view, he's happy to get paid for it.

It could go a long way to explaining why "Batman" would be raising the bat-signal in the trailer - because he's trying to get the attention of the real thing.

On top of all of that, they also claim a clue lies in the movie's title - Batman v Superman. They say that the "v" doesn't stand for versus, but rather it is a roman numeral indicating the fifth film in the series which includes the Dark Knight trilogy and the first Superman film, Man of Steel.

Warner Bros. have already announced two Justice League movies, but are apparently holding off on starting filming until after Batman v Superman is released - which some believe is because they don't want to spoil the surprise about Christian Bale's return.

While it does all seem a little far-fetched, you do have to wonder why Superman is getting second-billing in his own sequel.

popular
Scotland international rugby star Siobhan Cattigan dies aged 26
Elon Musk shares 'evidence' we are actually living in a simulation
A definitive ranking of every swear word from worst to best
Woman wins millions after suing mum's GP for allowing her to be born
Lovely Bones author apologises to exonerated man who spent 16 years in prison for her rape
Here's how to see who's been taking screenshots of your Instagram Stories
Nasa warns 'concerning' asteroid will break into Earth's orbit in a week
You may also like
News
Vigilante calling himself 'Batman' claims to have apprehended double murder suspect
Entertainment
Robert Pattinson promises 'rage-filled' Batman in 'radically different' film
Entertainment
Robin comes out as bisexual in new Batman comic and fans are thrilled
Comedy
Batman oral sex scene cut from DC series because ‘heroes don’t do that’
Sport
Robert Pattinson, Zac Efron and Louis Tomlinson are up to star in Jamie Vardy film
Next Page