The worst television show of all time ends for good tonight

Rejoice, our hell is over

Arguably the worst sitcom of all time, The Big Bang Theory, will air its final episode tonight. 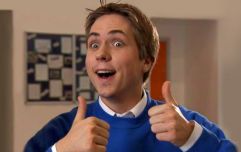 END_OF_DOCUMENT_TOKEN_TO_BE_REPLACED

The show about clever people for people who think they're clever but are actually stupid first dumped itself on our screens in 2007 and hung around for 12 years like a really bad fart.

After 280 episodes, it will finally be gone. Well, no new episodes will be made. Obviously, endless re-runs of the show will air for years to come. So, if you happen to like the show, you'll be able to watch endless dialogue that you don't understand - the show's only joke - between a group of scientists and the clichéd dumb blonde. Somehow that genius premise earned 52 Emmy nominations and 10 wins over its 12-year life.

The Big Bang Theory finale will air tonight on E4 at 8pm.

popular
Incredible case of the only known individual whose parents were two different species
TikTokers are utterly convinced there is a secret zombie apocalypse going on in China right now
Time traveller’ claims to know exact date Queen will die
Women need to be dating men 10 years older than them, says relationship coach
People compare reaction to Tommy Lee's explicit post with the scrutiny Britney Spears is facing
Jealous man glued wife's vagina shut as he caught her cheating with four men
Darius Danesh opened up about his health struggles before his tragic death aged 41
You may also like
Entertainment
Embarrassing Bodies is back and is looking for people to star in new series
News
Skins' Kathryn Prescott in critical condition after being hit by truck
Entertainment
Man forced to watch his girlfriend have sex with another man in brutal TV show
Gaming
Classic gaming show GamesMaster is being rebooted for E4
Quiz
QUIZ: How well do you know the US sitcoms that are on TV all the time?
Next Page