It turns out Nadiya, Tamal and Ian are more popular with the British public than Messi, Neymar and Suarez.

The final of The Great British Bake off drew an audience of 13.4m viewers, according to BuzzFeed.

That's almost three times the total who tuned in to ITV and Sky Sports for Barcelona's Champions League final victory over Juventus (a combined 4.55m). 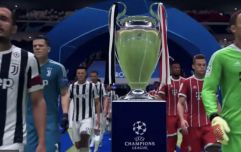 WATCH: How a Champions League final will look on FIFA 19

END_OF_DOCUMENT_TOKEN_TO_BE_REPLACED

There's no way of sugar coating it - viewers prefer
macaroons to Mascherano and buffets to Buffon.

The Bake Off finale also outdid the FA Cup final (which peaked at just under 9 million viewers) and was more than 10 million clear of the most-watched Premier League game on Sky last season (Man Utd v Chelsea drew 3.1 million).

Time to stop practicing your free-kicks and start spending your spare time making souffles. The people have spoken.