Forget their goal scoring records, ignore their medal counts or their international caps - Steven Gerrard and Frank Lampard have got their MLS FIFA 16 player ratings.

The Liverpool legend and the all-time Chelsea top scorer have been judged alongside the likes of fellow football behemoths David Villa, Didier Drogba and, er, Obafemi Martins. 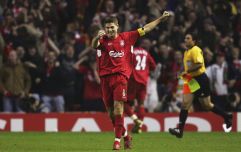 Make Us Dream reminds us of the greatness of Steven Gerrard

END_OF_DOCUMENT_TOKEN_TO_BE_REPLACED

While Merseyside's most famous son might be quite chuffed with his placing in the Top 20 players on the game plying their trade across the pond, Lampard might not be.

LA Galaxy midfielder Gerrard's stats made him the number one MLS player on the game. But Lampard, who scored his first goal for New York City FC, found himself further down the pecking order. He found himself behind US midfielder Michael Bradley, who was once on loan at Aston Villa.

We're sure he'll be on the phone to FIFA in the morning...