As the old saying goes, if you can't stand the heat, get out of the GBBO fit-for-purpose marquee.

Last night's show saw the bakers engaging in a spot of festival-themed baking, whereby they took a lot of drugs, saw the Kaiser Chiefs, asked a minor celebrity for a selfie, wore a lot of body glitter, slept for precisely one hour a night and then baked some stuff.

Just kidding, the festival part was actually a big ruse. The contestants just had to shoehorn Christmas and Easter and stuff into the narrative of their bakes. Stand down.

It was a gripping hour of television, made all the more exciting by the fact that bakers only used their oven for the first bake and then never again for the entirety of the episode. Look, GBBO never promised that it wouldn't be a wild show. We need to accept that.

1. In honour of festival week, Noel and Prue incorporated some festival essentials into their outfits 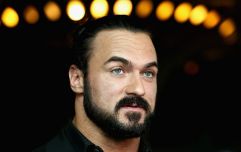 END_OF_DOCUMENT_TOKEN_TO_BE_REPLACED

Ah yes, festival week. A very reliable source of fine dining and baked treats. If in doubt, may I remind you of Fyre Festival? A triumph for adventure-seekers alike, who were treated like royalty and dined on such exotic cuisine as cheese sandwiches with a side salad consisting of two tomato slices and a handful of greens. Of course festival week is part of GBBO. They are two concepts married by imagination and a huge stretch. In true festival spirit, Noel dressed as a black sack (a camping essential) and Prue came clad in a necklace full of lemons (another camping essential if you are planning on being very sour all weekend because it keeps raining and your favourite act just cancelled last minute).

2. Prue's necklace stash was accidentally exposed in the background, sparking the threat of burglary

Remember that time Kim Kardashian was burgled in Paris? After that traumatic incident, she made the decision to stop sharing social media posts that expose her wealth and aid criminals in their plans to attack. Basically, Prue Leith needs to be more careful. Her necklace is fashioned out of lemons. The lemons appear to be very ripe and of good quality. In a cutaway shot during last night's GBBO, we saw Prue's jewellery stash placed in a basket behind one of the microwaves. She needs to be more careful going forward. This is like waving a red flag to a criminal bull. Her fruity jewellery needs to be safeguarded. This is negligent behaviour, Prue. Learn the lessons from the past and use them to better yourself.

3. Henry put improvised hacky sacks back on the map, finally

Chiwetel Ejiofor: How we made Children of Men

END_OF_DOCUMENT_TOKEN_TO_BE_REPLACED

Hacky sacks - the phenomenon that took the world by storm in the mid 90s, are back and they're better than ever. Henry, a child whose parents weren't even born in the 90s, put hacky sacks back on the map during last night's GBBO. But more than that, he put improvised hacky sacks into the public domain once more. Not everyone can afford a tiny little rice-filled bag, so you have to improvise. Henry used some leftover bun dough to flex his skills, much to the delight of stoners worldwide. Be prepared for the #1 Christmas gift of 2019 - improvised hacky sacks! Order now to avoid disappointment.

It's been 32 years since Jaws: The Revenge came out and it's high time for a sequel to get into production. In these increasingly modern times, we need a realistic premise and frankly, I can't think of a better one than a couple of rogue sharks invading the GBBO tent. Combine baking with horror as we see thirteen bakers put to the test in trying to complete beautiful bakes while the looming threat of shark attacks hang over them. Henry's actions have sparked something here. Perhaps they are merely double-ended spatulas in his bowl, or perhaps they are something more. Inspiration can take any form. Stay woke. 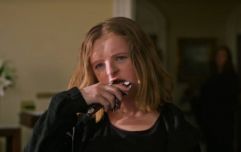 Watching the scariest film on Netflix

END_OF_DOCUMENT_TOKEN_TO_BE_REPLACED

Listen, when I said "things you might have missed", I didn't necessarily say that they would be important. Regardless, we as a society deserve to know what kind of sick freaks are taking part in our reality TV shows nowadays. Henry, up until now, has been a relatively pleasant young boy, certainly one who seemed to know how to write the letter 'F' correctly. But that all changed during last night's GBBO when sick filth Henry exposed himself as one of those people who writes an 'F' like it's an 'S' wearing a belt. Please adjust your log books accordingly. These bakers are not who they seem. We must remain vigilant.

6. Noel Fielding was caught doing the most un-goth thing possible and will now face serious repercussions from the goth community

As we've grown to love, Noel and Sandi employ a host of props during their time check announcements during the show. Sometimes they'll wear a funny hat or take part in a silly activity. True to form, last night they stuck to that format, except for one tiny detail. Noel Fielding was wielding a glass of milk. That's not a prop. You can tell by the ease with which he is holding it. Noel Fielding, a goth, drinks milk. As many of us know, that is a forbidden act in the goth world. Goth bones must be brittle and calcium deficient, as the rule book clearly stipulates. Noel will now face severe repercussions as a result. Godspeed, Noel Fielding. Why couldn't you just pig blood like a normal goth, smdh. You've ruined everything.


popular
The most overrated (and underrated) gym exercises of all time
Who is the most handsome footballer in the Premier League?
Young guys absolutely lose it hearing Phil Collins' In The Air Tonight for the first time
QUIZ: Name every WWF champion from the Attitude Era
The JOE Friday Pub Quiz: Week 203
The 11 unbreakable rules of making a cup of tea
Can you guess who Noel Gallagher is slagging off?

You may also like
Fitness & Health
How to get in movie star shape, from an A-list personal trainer
Entertainment
Introducing a French person to that episode of The Simpsons
Entertainment
The Last of Us Part II is utterly terrifying
Entertainment
Big Mad Andy's ultimate Peep Show quiz
Entertainment
Little Britain taken off Netflix and other streaming providers
Next Page