Screech and Slater had a mini 'Saved By The Bell' reunion

Where are Kelly and Zack and the rest of the gang?

Mario Lopez (better known as AC Slater) and Dustin Diamond (the one and only Screech) have been on two very different paths since Saved By The Bell wrapped up in the '90s.

Lopez has won himself a successful career in TV, hosting America's Best Dance Crew, before moving on to host the American version of The X Factor, and winning an Emmy as a news reporter.

#TBT To this past Sunday. Not to be cliché but it really does take a village to win an Emmy. And we have an awesome team at @ExtraTV! Grateful to be a part of it... #EmmyWinners #TeamExtra


The two met up this week in the context of Lopez interviewing Diamond about his time in prison. 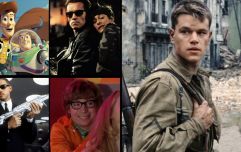 QUIZ: Identify 99 movies from the 90s by a single image

END_OF_DOCUMENT_TOKEN_TO_BE_REPLACED

Speaking of his experience, Diamond said: “It’s pretty scary going into that environment. I found that as long as you follow the rules and stay with the system, it works. You can get in and out unscathed.”

Diamond also made it clear that he wants to turn his life around, saying: “I want to put the tomfoolery and malarkey behind me… for that clean slate. Time for a change.”

Just to make you feel even OLDER, Diamond is now aged 39, and Lopez is 42 - though you wouldn't be able to tell from the shape he's in!

You may also like
Life
The five emotional stages of owning a Tamagotchi in the 90s
Quiz
QUIZ: Can you identify the 90s TV show from a single image?
Life
18 dorky texts we all would've sent in the 90s if we could
Quiz
QUIZ: Can you remember the names of these minor TV characters from the 90s?
Sport
If obscure 90s footballers are your thing, you'll ace this quiz
Next Page