Calm down, people aren't actually dying in this one. That would be wrong

It was always going to happen, wasn't it? Squid Game is happening in South Korea in real life—well, kind of... 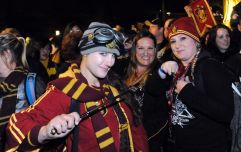 END_OF_DOCUMENT_TOKEN_TO_BE_REPLACED

As reported in the Korea Times, St. John’s Hotel in Gangneung will be hosting a real-life version of the show in an event that will see the winner receive five million won (approximately £3,090). It may not be as much as the prize money on the show but hey, at least you don't die in this one.

The hotel, located in the Gangwon Province of the country, shared information on the 'St. Game' event on their website as well as with a post on their Instagram. It costs just 10,000 won (£6.16) to register. Bargain.

One of the best parts about this adapted experience is that you don't need to be a guest at the hotel to be a part of it, nor is there an age restriction, meaning this thing could end up more like Raven than it does Squid Game.

As explained on the site, competitors receive a mysterious business card with a phone number before being sent to a pine forest near the hotel. From there, they compete in four games inspired by the show: 'the Mugunghwa flower has bloomed' ('Red Light, Green Light'), 'ttakji-chigi' (paper tile flipping), the now iconic 'dalgona (flat sugar candy) challenge' and a classic tug of war.

All that being said, the event itself is already underway, having actually kicked off on October 4 and set to run until October 31. What a way to spend your Halloween: potentially surviving the Squid Game and walking away around £5k richer.

The hit show created by Hwang Dong-hyuk, which became Netflix's most-watched show ever this week, is a global phenomenon and people are obsessed with it; there is already a talk of a season two, which hopefully means more games and more of the same craziness that captured everyone's attention this past month or so.

And who knows, maybe we'll see someone take note and trying out those games on British shores sometime soon?

popular
Woman discovers 'traumatic' truth about engagement ring after Googling fiancé
James Blunt threatens to release new music on Spotify if they don't remove Joe Rogan
Dr. Dre shares unbelievable video of Eminem's skills to prove no rapper could beat him
Man tracked down and killed son's paedophile abuser live on TV
The JOE Friday Pub Quiz: Week 279
New Highway Code rule means you should change how you listen to music in car from today
'Hey kiddo! This is your uncle ' - creepy moment OnlyFans star's relative finds her page
You may also like
Life
Teen who cares for disabled mum in council flat wins Eton scholarship
Life
The 10 most Googled questions about sex - answered
Life
Vegans outraged over 'ignorant' sign put up by 'psycho' butchers
News
Capitol Hill rioter asks judge for permission to use his social media to find him a date
Life
One in 30 people poo in the shower and you all need to be stopped
Next Page