Police in the US are reportedly investigating a ‘terrorist’ plot to kill legendary wrestler and occasional actor Hulk Hogan.

END_OF_DOCUMENT_TOKEN_TO_BE_REPLACED

But the threats don’t come from a shadowy caliphate set on ridding the world of muscles, handlebar ‘taches and intense tans - fellow pro wrestler Scott Steiner allegedly wanted to murder the Hulkster in an airport terminal recently.

According to US media reports, Steiner approached Hogan’s wife, Jennifer, at San Jose airport in March and told her that he planned to “Kill Terry” (The Hulk’s real, less cool name) once he landed. 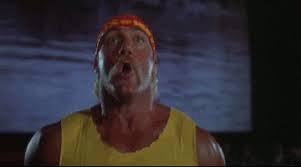 Hulk, being the Real American Who’ll Fight For Your Rights (fight for what’s right) reported the threat to police the following day and because of a quirk in American legal code, Steiner is now being investigated for “felony terrorist threats”.

END_OF_DOCUMENT_TOKEN_TO_BE_REPLACED

TMZ Sports report that Steiner feels this ‘snitching’ was typical from Hogan: “He’s just punk,” he said of the Suburban Commando and Hogan Knows Best star.

The pair used to be grappling buddies of a sort, until a Twitter dispute in 2012, when Steiner attacked Hogan and the rest of the management of Total Nonstop Action Wrestling in an incident that sparked legal action.

Since then, the pair have had beef. Hence the alleged threats of death.