This year, however, the parade was infiltrated by an oversees menace: anime.

Alongside mainstays like Charlie Brown and Bugs Bunny, Goku, the star of the Dragon Ball franchise, made his debut as a big New York balloon.

Obviously, this went down a storm online, as anime nerds on Twitter lol'd at fuddy-duddy news presenters getting befuddled by Dragon Ball lore. 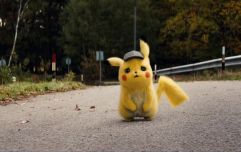 END_OF_DOCUMENT_TOKEN_TO_BE_REPLACED

In that video, they say that Goku is about to "become a movie star" - Wikipedia lists 20 animated Dragon Ball movies so far, along with the live-action American adaptation Evolution from 2009.

Goku wasn't the only anime character in attendance - Pikachu also had a giant balloon.

Goku and pikachu are the only 2 anime characters ever to get a balloon in the #macysthanksgivingparade pic.twitter.com/EC1T28OZ1r

Pikachu actually first appeared in the parade all the way back in 2001, during the first wave of Poke-Mania.

popular
John Bercow joins Labour party and launches attack on Boris Johnson
The JOE Friday Pub Quiz: Week 248
Rio Ferdinand responds to fans calling him out on terrible Scotland prediction
Hungary pull out 'celebration of the tournament' after opener against France
Cristiano Ronaldo's lung-busting run to score Portugal opener was inhuman
Thorpe Park mask policy compared to racial segregation
A definitive ranking of every swear word from worst to best
You may also like
News
Pokémon sends rare cards to boy who sold his collection to save his dog
Gaming
QUIZ: Name these Game Boy games from just a single screenshot
Gaming
The release date for Pokemon Sword and Shield has been announced
Gaming
The new Pokémon game will monitor your sleep, and and train your Pokémon based on your sleep pattern
Gaming
'Scottish Pikachu' is the Pokemon we all need right now
Next Page