He made a cameo on Saturday Night Takeaway last month.

It has been reported that Phillip Schofield has been offered a two album singing deal following a cameo alongside Ant and Dec last month. 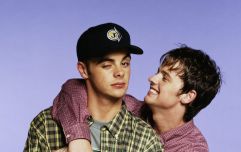 END_OF_DOCUMENT_TOKEN_TO_BE_REPLACED

The news comes after the This Morning host performed on Saturday Night Takeaway along with James Corden and Joe McElderry, putting on a special tribute to Andrew Lloyd Webber to celebrate his 70th birthday.

Although viewers were surprised by the 55-year-old's singing talent, he actually played the role of Joseph in London's West End in the early 1990s.

Here's how people responded at the time:

The fact @Schofe just did this just proves why he is the greatest Britain ever 😂😍❤️ pic.twitter.com/t2r0RPHgQr

Actually just screamed when Philip walked out on SNT omg @Schofe
Reminding me of the Knights of Music😱 pic.twitter.com/sqSGrVOs5q

END_OF_DOCUMENT_TOKEN_TO_BE_REPLACED

Now it looks like the cameo has led to big things for Schoey.

A source told The Sun: “It’s easy to forget he was in Joseph years ago.

"His cameo got people talking again.

"Warner wants to tap into that interest.

“His deal is for one album this year and one next.

“Execs hope he might have the same kind of success as Bradley Walsh.”

Nans up and down the country will be delighted.

popular
People want ‘offensive’ Crown Paints advert banned after attracting hundreds of complaints
Incredible case of the only known individual whose parents were two different species
Teacher's sex abuse sentence delayed after she gives birth
Darius Danesh opened up about his health struggles before his tragic death aged 41
Mum gives 5-year-old son at-home drills with backpack to prepare him for school shooting
TikTokers are utterly convinced there is a secret zombie apocalypse going on in China right now
Cyclists may have to get number plates under radical shake-up of road laws
You may also like
Entertainment
Ant & Dec make another dig at Boris Johnson and No 10 party cover-up
Entertainment
Ant & Dec call out the Prime Minister over Downing Street Christmas party
Entertainment
Ant and Dec kick off I'm A Celeb by mocking Ole Gunnar Solskjaer
Entertainment
Ant and Dec flooded with Ofcom complaints after Saturday Night Takeaway joke
Entertainment
Ant McPartlin will return to host I'm A Celebrity... Get Me Out Of Here in 2019
Next Page