"Down the hall and to the left"

Not sure if you've heard, but Home Alone is getting a reboot.

The specifics haven't been confirmed yet, but Disney is going to see to it that the movie is "reimagined for a new generation", so that sounds promising(?)

Does this mean that Donald Trump will make another cameo? Probably not, but that doesn't mean we can't do a performance review of his prior appearance in Home Alone 2: Lost In New York a concise 27 years after it was released.

The producers of the reboot are likely to be in the depths of some difficult casting decisions at the moment, so hopefully this can shed some light on the most suitable person to fill the role of 'Hotel lobby patron #9'. 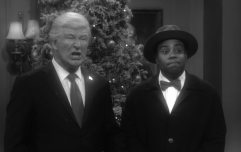 END_OF_DOCUMENT_TOKEN_TO_BE_REPLACED

Our first introduction to this seemingly-random hotel patron comes as young Kevin McAllister identifies him as being an approachable adult who can help him. All we're given is a limp hand beneath a jacket to ascertain whether Kevin's suspicions of cordiality are correct. Based on Kev's facial expression, he's a smidge confused by the person's appearance. Perhaps his acting experience has led him to easily identify an imposter on set. Nevertheless, he's committed to the decision in confiding in this strange man whose arm acting skills are mediocre at best.

"Excuse me", Kevin says. But the object of his attention continues walking, initially dismissing the call of distress. This is called acting. Donald Trump knew that he simply had to walk through the lobby and "unexpectedly" be accosted by a small child wearing a hat. But if he reacts too quickly, the audience will be taken out of the experience, realising that he preempted the action, like in work when someone's offering a tin of Roses around and you pretend not to be tracking their movements through the office until they reach you. "Oh, nice one, thanks", you say, unconvincingly surprised. You'd already decided which sweet you would pick long ago (the purple one, because it's the biggest and you're a pig), but you still put on a performance to seem as though you're simply too busy to notice a 660g tin of sweets making their way through the office, worried that you'll be forgotten.

Donald absorbs Kevin's question, "Where's the lobby?", taking a moment to process the information. When you're acting, your reaction times slow down. It's not simply enough to recite lines willy-nilly. Your job is to communicate a message to the audience, which in this case, is 'Am I allowed to speak to a small child?' and 'Oh yes, this is a movie, never mind'. Donald Trump looks him dead in the eye. 'One day I will be your President', he's thinking, but also trying to remember his lines. Seven words stand between him and nailing this cameo. He steadies himself, as all great actors do, going method for the briefest of moments. He is one with the character. The backstory is simple, he is a helpful stranger. Trump is visibly working overtime to relate.


Here's where the acting prowess takes form. Think about this scenario in real life. A small child has asked you for directions. What's your first instinct? Probably to look around for their parents or tell them to grow up, get a job, earn money, pay taxes and buy a phone that has a decent map application installed. But this is a movie, the world doesn't operate the same way. People are wearing coats indoors. Chandeliers exist. This is Home Alone 2: Lost In New York and when a young boy asks you for directions to a hotel lobby, you oblige. As has become a trend of late, Trump doesn't question anything. He has been asked a simple question and is going to do something that will probably be the very last time he ever does it. He gives a straight answer. 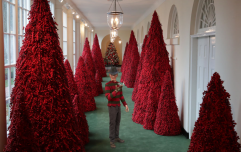 END_OF_DOCUMENT_TOKEN_TO_BE_REPLACED

"Down the hall and to the left", Kevin is informed, by a man that is acting. He is definitely acting, you can tell because nobody would ever rest their inactive hand in the way seen above. He uses his dominant hand to really hammer home the direction that Kevin must travel in. Down the hall, he points, then to the left, he points again. Little Kevin, or 'Lil Kev' as he's affectionately known, isn't looking at Donald Trump's tiny hands, though. He's looking at his face, amazed that he managed to shoehorn a cameo into this beloved movie. Donald Trump is acting, but Kevin McAllister is losing focus. This wasn't in rehearsal. Trump has gone rogue, adding hand signals to an already complex set of instructions. Improv was famously not welcome on the Home Alone 2 set, but this is Donald Trump's hotel and he will do as he damn well pleases in a bid to get another sweet, sweet IMDB credit.

After delivering the instructions to Kevin, Donald stands poorly-postured and expectantly looking at this tiny child. Again, he neglects to question the boy's safety or proximity to a legal guardian. He is still acting, that is undeniable. In reality, Donald Trump would have simply ignored Kevin McAllister, pushing past him in a hurry to get to nowhere in particular. He would not acknowledge the infant, looking on him as a useless tax-avoiding drain on the economy. Kevin McAllister is of no benefit to real life Donald Trump, who at the time was newly-divorced and partying with the likes of Jeffrey Epstein in Mar-a-Lago. He would see no problem in leaving an eight-year-old home alone for the holidays. In fact, he would encourage it, seeing it as a tool to harden this boy to the ways of the world, evading being captured by the Wet Bandits and suchlike.

"Thanks", Kevin says, in a confident and sincere manner. Donald Trump begins to turn away, but then he looks back at the small boy. He's thinking about something. "That's a strong hairline", or "I should bully my way into a cameo on Lethal Weapon too", or "Maybe I should run for President of the United States in 15 years time". Whatever his thought process, his body is still acting. Donald Trump was definitely told to do this action. He was given a small treat as an incentive, then one straight after for being an obedient participant. That's the kind of look you give a sale item with a hefty discount, certain that you don't necessarily need a Soda Stream, but at better than half price, it practically pays for itself with all of the carbonation possibilities that come with it. Fizzy milk can become a reality, if you simply let it.

The final shot of Donald Trump is harrowing. As Kevin McAllister meanders his way to the lobby, Trump drops all pretence of being a featured extra. He feels power, frankly a dangerous amount of it. In the same year that Home Alone 2 was released, the Plaza Hotel filed for bankruptcy protection and a prepackaged plan was approved. Things were happening, and he was evidently feeling bold enough to give directions to a small child in a movie. A monster was created in this very moment.

Donald Trump was made to feel like he could make a difference in the world, starting with a fictional character in a seasonal movie that is now a beloved classic. Everything that followed was inevitable. The prophecy fulfilled itself. If Kevin McAllister had simply asked that nice lady on the right for directions instead of a burgeoning egomaniac, things could have been very different for the world. He created a monster, he enabled evil in its purest form. Kevin McAllister should fry for what he has done. Everything is his fault.


popular
PlayStation and Xbox users will now be able to play against each other online
A definitive ranking of every swear word from worst to best
Here's how to open a Snapchat without the sender knowing about it
Here's how to see who's been taking screenshots of your Instagram Stories
The JOE Friday Pub Quiz: Week 183
Disabled army veteran breaks world record by deadlifting 505kg
This is the proper way to reheat a takeaway curry and avoid food poisoning

You may also like
Life
Ranking the most uncomfortable photographs from the G7 summit
News
Former editor of The Sun: Rupert Murdoch created Brexit and Boris Johnson
News
USA supporters chant 'Fuck Trump' after USWNT's World Cup win
Politics
"Getting several hundred swastika-emblazoned golf balls was the biggest challenge of my career" Simon Brodkin on pranking Trump
News
The 'friendship tree' planted by Trump and Macron last year has died
Next Page