All parents go to extra lengths to make their children's wishes come true at Christmas, but Chris Brown may have taken things a step too far this year.

The R&B star, no stranger to controversy, is feeling the heat from his animal-loving Instagram followers after sharing a video of his three-year-old daughter Royalty holding a live monkey wearing a nappy.

'Is this your baby?' the singer asks the little girl, who is naturally beaming while cuddling the tiny marmoset.

'She's going to be bigger than you, right. Y'all got the same size head.'

Many of the performer's 41 million followers reacted with horror and disgust:

'What an idiot!' posted Somethingaboutirene, 'This is animal abuse! Don’t you know that monkeys can get very agressive when they are kept to long in captivity? What an excellent gift for a child this is...' 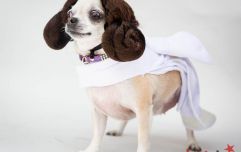 There is a Dog Cosplay event coming to the UK, if you want to dress your dog up as Iron Man or Darth Vader

END_OF_DOCUMENT_TOKEN_TO_BE_REPLACED

Poster ess_kay_7 added 'Not a TOY. A baby marmoset was ripped away from its mother. This is a WILD animal that needs a very particular habitat and care.'

The 28-year-old performer, who hit the headlines in 2009 after pleading guilty to felony assault of his then girlfriend, singer Rihanna, has not commented.