If you've been to a house party in the UK, which I hope is all of you, you will have had the misfortune of hearing a crowd of 25 slaughtered 20-somethings belting out Oasis' Wonderwall so badly it threatens to put you off the song for life. A similar phenomenon happened with The Killers' Mr Brightside, as it became the go-to karaoke song for many Brits, over-played to within an inch of its life, losing all novelty, and all sense of fun. See also: He-Ya, Outkast. 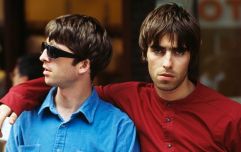 END_OF_DOCUMENT_TOKEN_TO_BE_REPLACED

This is just a natural side effect of a rock band having one of their tunes reach bigger heights than their other, better tunes.

And it turns out, it's not only the listeners whom it grates - the bands themselves grow to resent their own music too. Even Liam Gallagher hates Wonderwall, the song that helped Oasis break America.

While over here, songs like Don't Look Back in Anger, Roll With It and Live Forever have a similar standing among their greatest hits, in America the Gallagher brothers' Britpop outfit are widely regarded (unfairly) as a one hit wonder.

During his press run for Dig Out Your Soul in 2008, Liam told reporters: "At least there’s no ‘Wonderwall’ on there. I can’t fucking stand that fucking song! Every time I have to sing it, I want to gag.

"Problem is, it was a big, big tune for us. You go to America, and they’re like: ‘Are you, Mr Wonderwall?’ You want to chin someone."

Liam famously does not get on too well with his brother Noel these days, but disliking their biggest ever hit is a topic they agree on.

"Outside of England, it’s the one we’re famous for all over the world, and it annoys the fuck out of me," Noel Gallagher once said.

"It’s not a fucking rock and roll tune. There’s quite a vulnerable statement to it."

popular
Eddie Hearn: Billy Joe Saunders will be out for a 'long, long time' after injuring eye
This Billy Joe Saunders fan is probably regretting his choice of tattoo
The JOE Friday Pub Quiz: Week 242
Piers Morgan hits out at decision to replace him with Alastair Campbell on Good Morning Britain
Andy Burnham says 'Labour should get in touch if they need me' after election result
A definitive ranking of every swear word from worst to best
The hardest Marvel Cinematic Universe quiz you'll ever take
You may also like
Sport
Cocky Liam Gallagher goads Liverpool fans after Burnley defeat
News
Noel Gallagher says he is refusing to wear a face mask
Politics
Liam Gallagher vs Boris Johnson: Who'd make the better Prime Minister?
Sport
Noel Gallagher joins Manchester City squad in dressing room for Oasis singalong
Entertainment
The new Liam Gallagher documentary is a love letter to the hardcore fans
Next Page