Nooooo! Think of all the future classics we’ll missing out on.

Nicolas Cage is one of the greatest actors of his generation, starring in stone-cold classics like Adaptation, Wild At Heart, Face/Off, Con Air, Bad Lieutenant, Kick Ass and Leaving Las Vega. 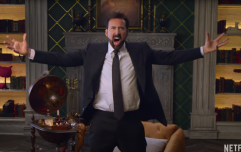 END_OF_DOCUMENT_TOKEN_TO_BE_REPLACED

Nicholas Cage is also one of the craziest actors of his generation, starring in films like The Wicker Man, Vampire’s Kiss, Ghost Rider: Spirits of Vengeance and Drive Angry.

Whatever your opinion on him, you have to admit that the film world is far more interesting with him in it. Which is what makes his recent announcement so depressing. In a video interview with The Blast, he says he is going to quit acting in about “three or four years” to concentrate on on directing.

“Directing is something I look forward to down the road. Right now, I’m primarily a film performer and I’m gonna continue doing that for three or four more years and I’d like to focus more on directing.”

Cage has only directed one movie before – 2002’s Sonny, starring James Franco. Though he has set up him own production company, Saturn Films. Whatever the case, it’s a said day for cinema. And memes.

popular
Maya Jama criticised for 'disrespectful' video outside Buckingham Palace
The JOE Friday Pub Quiz: Week 238
Big Brother star Nikki Grahame dies aged 38
Bars announce plans to open at 12:01am on Monday
BBC set up complaint form as viewers take issue with "too much" Prince Philip coverage
Prince Philip refused return to hospital in days before his death
Fireworks set off during two minutes' silence at Celtic game
You may also like
Film
Nicolas Cage doing Jiu Jitsu vs aliens looks like the greatest movie of the year
Film
Crazy rumour suggests Christian Bale and George Clooney offered roles in new Flash film
Entertainment
Nicolas Cage to play Tiger King Joe Exotic in new series
Film
We got an expert to tell us how close we are to making Face/Off a reality
Entertainment
Nicolas Cage has filed for divorce, four days after getting married
Next Page