Netflix finally confirm how to say their iconic intro sound

Gather round, we've just been made privy to a top Netflix secret...

Just like the 'dum, dum, dum dum dumdumdumdum' on EastEnders, the sound that plays when a Netflix show starts has become part of our lives - but the only difference is we were today-years-old when we learned how to say it out loud.

END_OF_DOCUMENT_TOKEN_TO_BE_REPLACED

Well, the correct way to say that noise out loud (as clearly that's the info we've all been missing in our lives) is "Tudum."

"TUDUM. What's that? You know it when you hear it - you just rarely see it spelt out," Netflix said in a press statement. "TUDUM is the first beat you hear when you watch a show or movie on Netflix."

So, there you have it: you're early to the biggest entertainment news of the year.

Bellow it in the shower, sing it on the commute, perform a dramatic rendition of it to friends with your arms waving around: Tudum is here to stay.

The streaming platform made the announcement to coincide with the launch of their first ever global fan event, which, yep, is obviously called Tudum, and takes place online on September 25.

A rep confirmed to JOE that Tudum will be largely pre-recorded, although there will be some opportunities for fans to interact with one another.

The event will feature previews of many of the platform's most popular returning shows, including new seasons of Stranger Things, Bridgerton and The Witcher, as well as Money Heist and Cobra Kai. 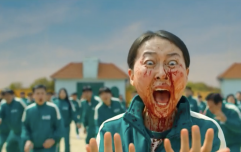 END_OF_DOCUMENT_TOKEN_TO_BE_REPLACED

Netflix movies soon to launch will also be featured in the Tudum Netflix line-up, which celebrates over 70 films and series. They include Dwayne Johnson and Gal Gadot thriller Red Notice, Leo DiCaprio and Jennifer Lawrence black comedy Don't Look Up, Chris Hemsworth thriller Extraction and Idris Elba cowboy movie The Harder They Fall.

Interactive panel events will feature creators and stars from the films, and there'll be opportunities for first looks at new trailers and exclusive clips from forthcoming projects.

So there you have it: Tudum is the golden nugget you need to stride into your next meet up with friends, confident you've got this year's best nerdy nugget of entertainment intel.

Tudum: it's here to stay.

TUDUM Netflix's Global Fan Event will be broadcast on Netflix'x Youtube channels, as well as Twitter and Twitch, at 9am PST / 12pm EST / 4pm GMT / 1am JST and KST. Pre-shows spotlighting Korean and Indian series and films along with exciting anime content that will kick-off at 5am PST / 8am EST / 12pm GMT / 9pm JST and KST on specific channels.