Jason Derulo was led away by police in Las Vegas after being involved in a fight said to have started after the singer was mistaken for fellow R&B artist, Usher.

END_OF_DOCUMENT_TOKEN_TO_BE_REPLACED

A passerby filmed the 'Talk Dirty' singer travelling down an elevator inside the ARIA hotel lobby during the early hours of Tuesday morning and everything seemed fine.

According to TMZ, two men then yelled out to Derulo, mistaking him for Usher.

It is not clear whether the man knew who Derulo was and was taunting him, or if he legitimately thought the guy passing him on the elevator was the 'Confessions' singer.

END_OF_DOCUMENT_TOKEN_TO_BE_REPLACED

Regardless, it didn't take long for the Wiggle singer to allegedly react to the heckler.

TMZ reports that Derulo punched him in the face and slapped the other man who was with him. 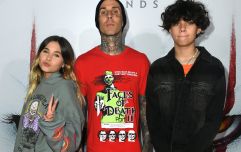 END_OF_DOCUMENT_TOKEN_TO_BE_REPLACED

Video shows the men wrestling on the ground as security try and separate them.

TMZ said the men did not appear to need hospital treatment but were bleeding.

The men are said to have declined to press charges against Derulo, but they have 12 months to bring a lawsuit against him.

Derulo was allegedly led away in handcuffs and received a trespassing notice from ARIA.

popular
R Kelly will probably die behind bars after being handed 30 year prison sentence
Bette Midler wants the US to ban Viagra because it’s ‘God’s will’ to have a ‘limp d**k’
Fans shocked after Machine Gun Kelly smashes glass on his face during performance
Travis Barker’s daughter shares picture of Blink-182 star in hospital bed - tells fans to ‘send your prayers’
British teen says she was raped in Majorca hotel by 'famous actor and musician'
Police hunt for two 'laughing' men who kissed three-year-old girl in front of distressed mum
July heatwave: When to expect hot weather and how long it will last
You may also like
Music
The JOE Music Quiz: Week 18
Music
Uncredited writer of Usher song awarded $44 million in damages
Music
WATCH: Usher's carpool karaoke will make you love him even more
Sport
Harry Kane's Euro 2016 playlist is certainly...varied
Entertainment
The Obamas gave Usher the best birthday ever
Next Page