You can burn some serious calories playing Pokemon GO

The world is going crazy for Pokemon GO right now.

Millions of fans are traipsing around the streets of every major global city, glued to their phones looking for Pokemon to catch and trainers to fight. It's every '90s kid's dream.

END_OF_DOCUMENT_TOKEN_TO_BE_REPLACED

The new augmented reality app, which has finally launched in the UK, allows you to see Pokemon in the game overlaid on real-world locations.

But you have to go outside and hunt them down to catch 'em all - with water Pokemon found near lakes and rivers and grass Pokemon out in parks and fields.

Therein lies the beauty of the game. It gets gamers off their arses, out of their bedrooms and into the real world and moving around.

Don't underestimate the power of this game to get you fitter, burning fat and losing weight either.

Walking is incredible exercise for burning calories. If you've ever had a fitness tracker you'll know just how many calories you can burn off walking - and you're going to be doing A LOT of it if you're playing Pokemon GO.

The mobile game uses your smartphone's GPS map to take you to physical locations around your town or city where you can catch Pokemon or battle other trainers at digital 'gyms'. 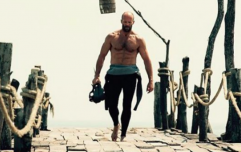 The Jason Statham workout for strength and fat loss

END_OF_DOCUMENT_TOKEN_TO_BE_REPLACED

The more you walk and explore, the further you get in the game - and obviously the more rare and exotic Pokemon aren't just going to be sat in the bottom of your garden.

You can't cheat the system either, there's an in-app speedometer that knows if you're travelling at more than 5 to 10 mph and will stop tracking if you do.

Eggs also won't hatch unless you walk say 2km, 5km or even 10km and the app measures all your distance travelled. So basically, you have no choice but to get on Shanks' Pony and walk.

Why is walking so good for you then? Well, apart from the general health benefits of improving energy levels, lowering blood pressure and cholesterol, it is an incredibly effective fat burner.

Because it's so low impact and your heart rate isn't spiked enough, your body won't burn carbs and will instead tap into your fat reserves for energy to burn.

Pokemon is about to solve Americas obesity issue. Burn calories and catch Charzard... It's a win win

Just walking around trying to catch Pokemon for an hour can burn 262 calories for the average British man (weighing 12st 6lbs).

Given that you'll probably be hooked on the game and playing it for more than an hour at a time, you can expect to burn of even more calories.

This chart from Very Well shows how much you can burn depending on your bodyweight and how far you walk...

Already we're finding out that people are clocking up some incredible mileage playing Pokemon.

'In the six days that I've had it since the public release, I've walked 36.1km (about 22 miles), according to the game,' Seattle man Joe Kim, who was one of the first people in the world to test the game, told Men's Fitness.

A Reddit subgroup has already sprung up with tales of Pokemon GO trainers sharing stories about their physical exploits playing the game...

And the old saying 'if it's hurting, it's working' is anything to go by, then the game must be having a positive effect...

Walked so got damn much last night because this Pokemon GO shit is controlling my life, my legs are sore lmao

My legs are actually sore from all the walking I did yesterday playing pokemon go...who needs a gym membership

Pokémon go is the best work out I have ever gotten

popular
British teen says she was raped in Majorca hotel by 'famous actor and musician'
Police hunt for two 'laughing' men who kissed three-year-old girl in front of distressed mum
Father takes his own life after 18-month-old found dead in hot car
Travis Barker’s daughter shares picture of Blink-182 star in hospital bed - tells fans to ‘send your prayers’
'You're disgusting': Prince William roars at photographer who was 'stalking' his family
Angela Rayner humiliates Dominic Raab over opera reference
Halifax has introduced staff pronoun badges and its customers are not happy
You may also like
Life
Man gets 2kg dumbbell stuck in his bum - doctors forced to pull 20cm weight out by hand
News
Woman calls out 'ego lifter' man at gym - gets absolutely schooled
Music
Fans lose it as video finally reveals how 50 Cent got upside for Superbowl performance
Fitness & Health
Saints star George Furbank on the biggest gym demon in the England squad
Life
Woman nearly died after spin class left her with a life-threatening condition
Next Page