We made it. After ten long weeks of witnessing baking triumphs, disasters and Paul Hollywood's ability to remain eternally mahogany, we have finally reached the GBBO final.

It was a gripping affair from start to finish, complete with all the tension and spectacle of a Michael Bay movie, minus the budgetary requirements for special effects.

Ten weeks in, the unintentional hilarity thankfully continued with as much gusto as the first episode.

Here's six moments that probably weren't supposed to be funny, but they were.

1. Rahul's friend transcended through space and time to body him at 9 years of age END_OF_DOCUMENT_TOKEN_TO_BE_REPLACED

Rahul was speaking about his friends that took him under their wing once he arrived in the UK. We were then treated to a touching scene where Rahul was showing old photographs to the pair, who had no qualms in bodying him on national television. "But you're not even smiling there", Liz remarked about 9-year-old Rahul who was standing in front of the Taj Mahal. It's a fair comment and a decent bodying. Even at 9 years of age, Rahul was the human embodiment of Eeyore.

2. A wasp tried to have *~relations~* with one of Kim-Joy's sugar bees

Kim-Joy was innocently preparing the decorative additions to her doughnuts when a rogue wasp entered the arena. It hovered over one of the sugar bees and proceeded to attempt having relations with it, obviously to no avail. This was broadcast before the watershed and is expected to result in 5,000 complaints to Ofcom as that kind of vulgarity simple isn't acceptable to have on our television screens, especially not on a cold October Tuesday evening before 9pm. GBBO, how very dare you destroy the sanctity of baking with such lewd content. 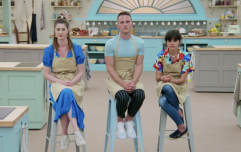 Six things you might have missed during the GBBO final

END_OF_DOCUMENT_TOKEN_TO_BE_REPLACED

When Prue, Paul, Noel and Sandi were having their usual chat and brew after the technical judging portion of the show, Paul said "It all comes down to the baking and the baking chooses the winner, not us". Never one to miss an opportunity, Noel responded with "The baking won't do that, you do know that? It's not that abstract, this show" and everyone rightfully erupted into convulsions of laughter. Prue closed things off with "If they use any of this, I'll be astonished" and hysterically, it was all included in the final edit. Britain, it has to be said, Mel and Sue could never.

4. Rahul exploded one of his storage jars using the power of his mind

The bakers had just begun their final showstopper challenge when seemingly out of nowhere, one of Rahul's storage jars exploded "because of the heat". Funny that nobody else experienced a similar occurrence? And that it was just one jar of his that exploded? It doesn't take a genius to work out what happened here. Rahul wasn't thrilled with how his preparations were going, so he exploded the jar using his mind, which meant he'd get to start again and receive an extra allocation of time in which to do it. The production team rushed in to clear his workstation and once the space was deemed safe, off he went. Rahul played them. He played all of us. And tbh? Mad respect.

5. Noel asked Rahul to describe himself in one word and he went with... 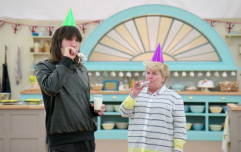 END_OF_DOCUMENT_TOKEN_TO_BE_REPLACED

Rahul made it to the final of GBBO (and subsequently won it) but he still somehow maintained the outlook that he didn't deserve to be there. As Noel was doing his usual wander around the tent trying his best to distract the bakers all in the name of content, he crowned 'Whimsical' Kim-Joy, 'Stroppy' Ruby and then asked Rahul to describe himself in one word. Naturally, Rahul went with 'Depressing' because as I have said time and time again, he is the human embodiment of Eeyore. Will we ever see a more relatable GBBO contestant on our screens? Unlikely.

A lady, presumably a friend of Kim-Joy wore an umbrella had to the GBBO final, an event which she would've been fully aware was going to be televised. This is an act of immense commitment to banter that we've never seen on GBBO before. One year an attendee of the garden party dressed up as a giant inflatable T-Rex but was forced to remove the costume after production found it was distracting from the bakers' triumphs in reaching the final. I don't know who this lady is. I don't know her motivations for wearing the umbrella hat. All I know is that she is banter personified and Britain needs to recognise that in an official capacity. Your move, government department dedicated to recognising legends.

You may also like
News
Mars to change name of Uncle Ben’s rice from next year
Food
One in 10 Brits think bacon isn't essential to a Full English
Food
You can now buy a massive jar of Percy Pigs from Marks & Spencer for just £15
Food
Poll of Britain's favourite pasta shapes sparks spicy debate, and rightly so
News
How to find out which restaurants near you are participating in Eat Out to Help Out
Next Page