It was a relatively uneventful episode, something many viewers welcomed after last week's appearance from an easily excitable Gemma Collins. This time, it transpired that the four celebrities were all relatively decent at cooking, which meant there wasn't a huge amount of disastrous content to make fun of, unfortunately for me.

1. Finally some real celebrities showed up when The Black Eyed Peas made an appearance


The Celebrity Masterchef team have obviously heeded the concerns of viewers over recent weeks where they complained about the lack of any actual celebrities taking part on the show. It was a welcome addition to last night's proceedings when The Black Eyed Peas showed up. Country singer Stella Parton added the group to her dish, which excited viewers beyond belief. Finally, a credible selection of people that have sold 76 million records making them them one of the world's best-selling groups of all time. Gemma Collins who? At long last, we've got some real talent on our television screens, mixed in with some spring onions and boiling water. Tasty. 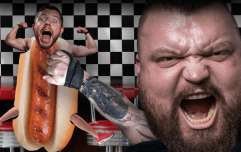 END_OF_DOCUMENT_TOKEN_TO_BE_REPLACED

2. Clara Amfo reinvented the cheesecake, much to Gregg Wallace's horror

Described as "buttery biscuit balls topped with raspberries with a raspberry fool, white chocolate buttons and cream", Gregg said it had all the flavours of a cheesecake, despite not being an actual cheesecake. John said it would be the perfect treat for the cinema because it's dark in there, which was a nice way of saying that it looked like ass. The judges have proven that their minds are simply too closed for the modern age. It's 2018, cheesecakes don't even have to contain cheese anymore, nor do they need to look like cheesecakes. Open your minds, Celebrity MasterChef judges. You might just like what you find.


Being plummeted into the depths of a busy kitchen during the Celebrity MasterChef task wasn't enough to phase singer Stella Parton as she remained impressively composed throughout. Her face barely cracked a frown as she was pushed to the limits by having to cook endless quantities of pork chops for the restaurant's patrons. Just how did she manage to hide her emotions? Some say it might be due to the wonders of modern cosmetic surgery, but I question whether she has ever indulged. That's a perfectly natural eyebrow arch, particularly for someone of Stella's age. She probably just does yoga.

4. Clara sacrificed half a peach to the floor Gods

As is customary during every episode of Celebrity MasterChef, Clara took it upon herself to be the one to sacrifice half a peach to the floor Gods. It's an important task that guarantees the success of the series, whereby all spirits from the occult collectively agree to forego tormenting the production process so long as someone sacrifices precisely one half of a peach to the floor. The peach can take any form, but it must end up being face down on the ground, with the other half nearby but not on the floor. Clara is a hero and deserves the utmost commendation for this sacrifice.

5. Clara, Stella and AJ applauded John and Gregg as they played Spin The Bottle


It was an unexpected twist in last night's Celebrity MasterChef, but a welcome one. Rather than having the celebrities doing all the work, John and Gregg decided to change things up a bit and put themselves on the chopping block for once. They played Spin The Bottle for an impressive 45 minutes, with the inevitable outcome each time meaning they had to lock lips. Nobody enjoyed it more than the celebrities, who egged them on from their workstations. It's expected that Celebrity MasterKiss will launch next spring, with funding coming from the National Kissing Association of the United Kingdom.

6. There's a photograph of Noel Edmonds and Mr Blobby in the Celebrity MasterChef green room, for some reason

Haters will say it's photoshop, but true fans will believe that there is a genuine photograph of Noel Edmonds and Mr Blobby framed and taking pride of place in the Celebrity MasterChef green room. Lisa Maxwell didn't appear to notice the television royalty she was sat beside, otherwise she would've been facing the other way to honour the true King and King of England. It's unclear why the photograph is in the green room and not placed on the kitchen worktops in front of every celebrity as they cook, perhaps it is in the room to provide them with reassurance that everything will be alright in the end. We may never truly know.

You may also like
Food
How to take your grilled cheese to the next level
Food
Trying classic British snacks for the first time
Life
Come Ramadan With Me: Fasting For A Day
Food
How to make a Greggs Sausage, Bean & Cheese Melt at home
Food
How to make cacio e pepe like a real Roman
Next Page