The Shelby boys are back.

A trailer for the third series of Peaky Blinders has landed - and it looks fantastic. 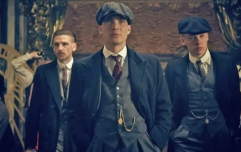 END_OF_DOCUMENT_TOKEN_TO_BE_REPLACED

Cillian Murphy is back as Tommy Shelby and joined once again by Tom Hardy for the post-World War I drama.

In the new series, the Shelbys will be facing the Russians  - and judging by the trailer it's going to be explosive. If you're not a fan of the show already, you can watch the series on Netflix before it returns to BBC Two on May 5.

Lead image and video via YouTube/BBC