Known as a veritable health guru these days, even Gwyneth Paltrow did her fair share of lockdown living

When the first quarantine's started around March 2020, people typically went one of two ways: either get incredibly fit to keep some motivation in your life, or absolutely crumble and eat your weight in beer, cheese and bread. 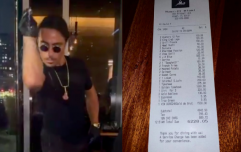 END_OF_DOCUMENT_TOKEN_TO_BE_REPLACED

Well, Gwyneth Paltrow might have only opted for the latter of those and, apparently, she's more of a whiskey drinker (you and me both, Gwynny), but it's good to know that even the healthiest of people cut themselves some slack during lockdown.

Speaking on the Smartless podcast - hosted by household Hollywood names, Jason Bateman, Will Arnett and Sean Hayes - the actress and Goop founder admitted that she "went totally off the rails" in the past year.

By which she means, she spent most of lockdown "making pasta and eating bread". Probably gluten-free and all that lark but still sounds like heaven on earth. If you look on her Instagram, it looks like she's been making all sorts of indulgent delights.

For context, Paltrow is usually known for trendy, health craze habits - even her self-proclaimed “fantastic drink called the Buster Paltrow”, which she enjoyed throughout lockdown, is made from quinoa. She said it was named after her grandad, who loved whiskey sours, though we reckon they had vastly different mixology techniques by the sounds of it.

END_OF_DOCUMENT_TOKEN_TO_BE_REPLACED

She also said that she drank every night of the week; somehow we can't quite imagine Pepper Pots on the lash but fair play, Paltrow, fair play. She went on to admit that it probably wasn't the best lifestyle choice: “I mean, who drinks multiple drinks seven nights a week? Like that’s not healthy".

While she did qualify that she would only have a couple a night and that she never got "blackout drunk". In which case, you're doing better than most of us, don't worry. Apparently, you can make one with just Tennessee whiskey (quinoa variety optional), maple syrup and some lemon juice.

popular
North Korea is running out of food as a bunch of bananas 'now costs $45'
GB News fans cancel Specsavers because they hate cancel culture
Paul Gascoigne reckons he was a better player than Foden even when he was drunk
A definitive ranking of every swear word from worst to best
John McGinn asks for a bottle of Coke at Euros press conference
Russian manager goes against Ronaldo and drinks bottle of Coke at press conference
GB News reads out prank messages from 'Mike Hunt' and 'Mike Oxlong'
You may also like
News
Man says he failed drug test for job after 'eating poppy seed bread'
Food
Burger King store replaces all meat with 100% vegan products
Fitness & Health
Majority of overweight adults have been fat shamed by their doctor, study finds
Food
A guide to the 10 best takeaways in Manchester
Food
Irn Bru fish and chips are a thing and I don't know how to feel about it
Next Page