As always, if you haven't seen the latest Game of Thrones episode, consider this to be your spoiler alert warning.

END_OF_DOCUMENT_TOKEN_TO_BE_REPLACED

Aside from the fact that he screamed at a dragon - was he yelling 'GO!' to Arya in a honourable moment of self-sacrifice, or is he just loopers? - Jon Snow's tactics during the Battle of Winterfell were questionable to say the least.

Granted, the former King in the North won the colossal duel against the Night King so he could argue that the ends justified the means, but the defence of The North was certainly far from perfect.

Sending a horde of Dothraki to their imminent death, placing a battalion of soldiers in front of the trench, sending women and children into the crypts (remember he knew the Night King could raise the dead), stationing catapults outside of the walls of Winterfell; a few of his decisions raised an eyebrow.

END_OF_DOCUMENT_TOKEN_TO_BE_REPLACED

There's loads to discuss about the Battle of Winterfell, but one thing that's not up for debate is Jon's ability to kick some undead ass. Despite the fact that Arya landed the killer blow on the Night King - something that Kit Harington jokingly said had pissed him off - Jon Snow got his sword dirty during the dramatic battle.

Cnet analysed every frame, second, and death in The Long Night and they've summarised that Arya Stark fully deserved her status as the MVP of the episode.

To begin with, there are two rules.

1) No dragons - if this wasn't a stipulation, Jon, Daenerys and the Night King would be much higher up the list.

END_OF_DOCUMENT_TOKEN_TO_BE_REPLACED

2) Indirect kills don't count - Melisandre setting fire to the trench did kill an awful lot of wights - some threw themselves on the fire willingly - but The Red Woman's main contribution isn't a main factor. Also, Arya killing the Night King ultimately caused every single wight, White Walker, and Viserion to die, but in the famous words of Gimli from the Lord of the Rings: "That still only counts as one."

Having looked at the stats, Arya has the highest kill count from the battle with 22 kills. Further proof that she's possibly the most brutal warrior in all the Seven Kingdoms.

Theon's heroics in the Godswood saw him score an impressive 20 kills as Ned Stark's ward died in a blaze of glory.

Jorah's death was one of the episode's most emotional moments and he took 19 corpses with him as he defended Dany until his death. Speaking of the Mother of Dragons, she props up the list with one kill.

Truth be told, we find it a bit unfair on Lyanna Mormont that she's tied last with Daenerys. After all, the Lady of Bear Island did kill a bloody giant! 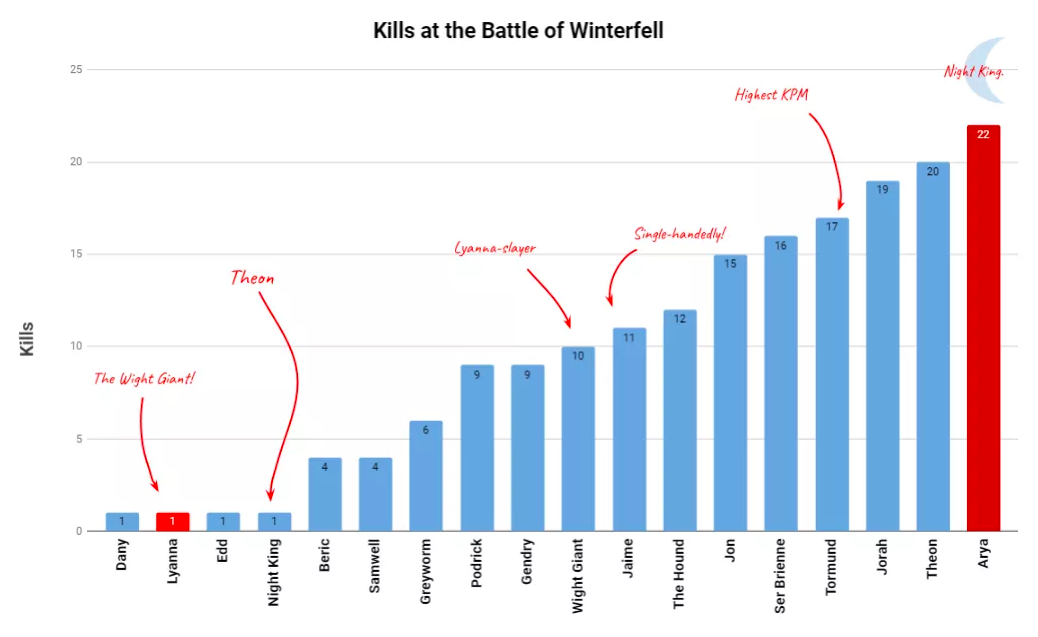