We now have a release date for Season 7 of Game of Thrones... and we're so happy. 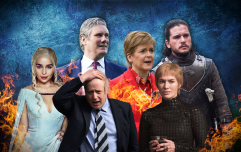 END_OF_DOCUMENT_TOKEN_TO_BE_REPLACED

Game of Thrones will return to our screens on July 16, as we look forward to seeing winter well and truly arrive.

The previous season ended with Jon becoming the newly proclaimed King in The North, after House Stark reclaimed Winterfell from the tyranny of Ramsay Bolton's rule.

Who can forget the scene with the dogs?

You may be wondering why the seventh season is so late coming back to our screens. Well, up until now, each season has taken place during an extended summer.

END_OF_DOCUMENT_TOKEN_TO_BE_REPLACED

But as the last season ended, winter had just arrived. Hence filming was delayed last year until the weather got darker and drearier for the purposes of the show.

Therefore, it missed its regular end of march/early April premiere of norm.

As we see in the teaser below, Winter has well and truly arrived in Westeros.

popular
Eddie Hearn: Billy Joe Saunders will be out for a 'long, long time' after injuring eye
This Billy Joe Saunders fan is probably regretting his choice of tattoo
The JOE Friday Pub Quiz: Week 242
Piers Morgan hits out at decision to replace him with Alastair Campbell on Good Morning Britain
Andy Burnham says 'Labour should get in touch if they need me' after election result
A definitive ranking of every swear word from worst to best
The hardest Marvel Cinematic Universe quiz you'll ever take
You may also like
Football
Jose Mourinho reveals his incredible desk chair with Batman and Game of Thrones logos on it
Fitness & Health
The Mountain explains how he's been dieting to lose 36kg for Eddie Hall fight
Uncategorized
Game of Thrones and James Bond star Dame Diana Rigg has died aged 82
Fitness & Health
The Mountain: Hafthor Bjornsson hits back at Eddie Hall after 501kg world record deadlift
Entertainment
This collector's edition of A Game of Thrones might just heal the wounds of season eight
Next Page