Indiyah and Dami were so close to bagging second place

The final Love Island results have been revealed by ITV - and they show Ekin-su Cülcüloğlu and Davide Sanclimenti won by landslide!

END_OF_DOCUMENT_TOKEN_TO_BE_REPLACED

Viewers voted for their favourite couple after a summer's-worth of romance, with the winner revealed on Monday night at the end-of-season finale.

Davide and Ekin-su were crowned 2022 champions, scooping a whopping 63.69 per cent of the total vote.

In comparison, ITV revealed that second-placed Gemma and Luca received just 14.47 per cent of the vote.

And Indiyah Polack and Dami Hope weren't far behind them on 11.77 per cent.

END_OF_DOCUMENT_TOKEN_TO_BE_REPLACED

Tasha Ghouri and Andrew Le Page ended the series in fourth with 10.07 per cent.

Ekin-su and Davide shared a video message with fans after their victory was announced.

“Thank you everyone for voting [for] us and thank you for making us who we are,” said Ekin-su.

Davide added: “I didn’t expect it. I still don’t believe it.”

A message from your #LoveIsland 2022 winners Ekin-Su and Davide to everyone who loved watching them this summer 💗 pic.twitter.com/GgwP9N5RL1 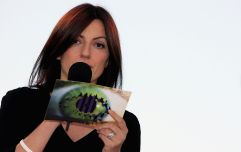 END_OF_DOCUMENT_TOKEN_TO_BE_REPLACED

The finale of the ITV2 reality series drew in 3.4 million viewers on Monday night (1 August), making this season’s conclusion ranking as the most-watched since 2019.

Sharing a picture of him and his daughter, the Premier League legend simply tweeted: "She's done us proud".