Michael Owen said his daughter Gemma had "done us proud" after the conclusion of this year's Love Island series.

END_OF_DOCUMENT_TOKEN_TO_BE_REPLACED

Gemma has been one of the stars of this year's series and made it all the way to the final with her partner Luca Bish.

But, despite making it all the way to the final two in Monday's final, the pair fell at the final hurdle as the bookies' favourites Ekin-Su Culculoglu and Davide Sanclimenti claimed the crown.

Following the finale, Gemma's dad, Michael, tweeted how proud her family were of her.

Sharing a picture of him and Gemma, the Premier League legend simply tweeted: "She's done us proud"

END_OF_DOCUMENT_TOKEN_TO_BE_REPLACED

Michael has chosen to keep a relatively low profile throughout the series.

Before the series began, Gemma said that her dad wasn't "buzzing" about her appearing in the villa, but that he was "pretty chilled" and trusted her not to do anything to embarrass them. 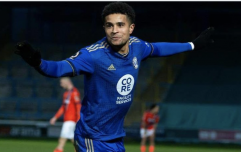 END_OF_DOCUMENT_TOKEN_TO_BE_REPLACED

He didn't appear on the famous meet the parents episode, with his wife Louise instead travelling to the villa for that.

And when he has commented, he's kept things very simple. Earlier in the series, in a particular racy moment involving Gemma, a simple emoji from Michael said a thousand words.

It remains to be seen whether Gemma has managed to find love in the villa. Her and Luca have been together for most of the series and left the villa together following the final, but Luca has certainly been a source of controversy for many viewers.

popular
Multiple fatalities after planes collide mid-air over airport
Former Playboy Bunnies detail what it was like having unprotected orgies with Hugh Hefner
Gerard Butler breaks silence after death of 'brother in arms' Darius Danesh
UK city named the 'most dangerous' in Europe, according to study
Incredible case of the only known individual whose parents were two different species
Mum cuts off boyfriend's 'private parts' after he 'tried to rape 14-year-old daughter'
Man gets full sized Stella tattoo on his head because he loves the drink that much
You may also like
Sport
Gary Neville reveals he collapsed during England Euro 2020 win against Germany
Sport
Sir Jim Ratcliffe confirms he wants to buy Man United
Sport
Man United linked with their 13th player in the last 24 hours
Sport
Chelsea to investigate alleged racist abuse aimed at Heung-min Son
Sport
Glazer family could sell minority stake in Man United
Next Page