She went viral last night after she made funny faces to the camera and appeared to mouth “Call me".

Este from Haim has reached out to Cheryl (formerly Cole) after she went viral in the background of an interview at last night’s BRIT Awards.

Jack Whitehall interviewed Cheryl and Liam Payne live at the ceremony, amid tabloid speculation about their love life. However in the background of the chat, Haim bassist Este made funny faces to the camera and appeared to mouth “Call me”.

Although she was described as a "drunk woman" on social media, she claimed on Twitter that she was “not drunk” and “just living [her] truth”. Sure.

Este @HAIMtheband called @CherylOfficial to clear things up about being the 'drunk woman' behind her and @LiamPayne at last night's #BRITs 😂😭 pic.twitter.com/C7M5jvINls

Anyway, this morning, Haim appeared on Radio 1, with Nick Grimshaw calling Cheryl’s phone for Este to clear the air. 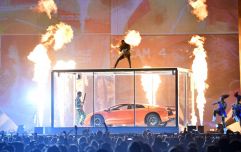 From #BRITssowhite to Big Mike's triumph

END_OF_DOCUMENT_TOKEN_TO_BE_REPLACED

“I happened to be sitting behind you last night at the BRIT Awards, had an amazing time,” Este said. “However, some people on the internet are claiming that I may or may not have been, I don’t know, thumbing my nose at the situation in front of me. That’s an Americanism.”

She added: “But I just want to let you know that there’s no beef and I’d like to invite you to my show at Alexandra Palace on June 15, 2018.”

All good in the hood, Cheryl?