He's known for his soulful voice and deep love of about six football clubs, but Drake won't be bothering the goalscoring charts with finishing like this.

Having a kickabout with his entourage on transfer deadline day, perhaps the RnB crooner was trying to catch the eye of desperate managers on the look out for a last-gasp marquee signing. 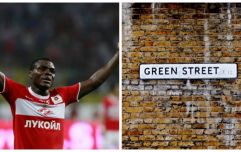 END_OF_DOCUMENT_TOKEN_TO_BE_REPLACED

However the likes of Barcelona, Chelsea, Manchester United and City, and various other sides he claims to support won't have been overly impressed with the Canadian's wayward finishing.

Drake 'dribbles' the ball into space before lining up his stunning effort at goal - except he shanks it horribly wide and breaks a glass lamp.

The in-denial performer then shouts "Gooooooool!" at the non-goal, and has the cheek to suggest it was intended, with the Instagram description 'Crazy Lamp Trick Shot'. He even copies in Cristiano Ronaldo.