Safe to say, Sheen is not a Trump supporter.

The former Two and a Half Men actor appeared on Graham Norton's couch and had an interesting story about meeting Donald Trump at a dinner party. 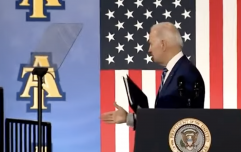 END_OF_DOCUMENT_TOKEN_TO_BE_REPLACED

Five years ago, while Sheen was engaged to Brooke Mueller, Donald Trump apologised for not being able to attend their wedding, even though he wasn't invited.

Trump told Sheen that he wanted to give him an early wedding present.

"These are platinum diamond Harry Winsten." Trump claimed, pulling off the cufflinks he was wearing, to give to Sheen.

Sheen says that he was of course flattered, but a few months later when he got the jewellery appraised, he discovered that the cufflinks were fake.

END_OF_DOCUMENT_TOKEN_TO_BE_REPLACED

It only took ''about four seconds'' for the appraiser to realise that they were at very best "cheap pewter and bad zirconia, and they're stamped Trump."

So there you have it, the presumptive Republican nominee gave Charlie Sheen cheap cufflinks with his own name stamped on them. Classy as always.

popular
People want ‘offensive’ Crown Paints advert banned after attracting hundreds of complaints
Incredible case of the only known individual whose parents were two different species
Teacher's sex abuse sentence delayed after she gives birth
Darius Danesh opened up about his health struggles before his tragic death aged 41
Cyclists may have to get number plates under radical shake-up of road laws
TikTokers are utterly convinced there is a secret zombie apocalypse going on in China right now
Mum gives 5-year-old son at-home drills with backpack to prepare him for school shooting
You may also like
News
FBI were looking for classified nuclear documents during search of Trump's Mar-a-Lago home, report claims
News
Donald Trump says FBI agents 'raided' his Mar-a-Lago Florida home
Life
Ivana Trump has died at the age of 73
Life
Couple who smoked a joint inside the US Capitol say 'we brought this on ourselves'
News
Joe Rogan reveals the one reason he will never have Donald Trump on his podcast
Next Page