David Bowie's wife Iman is seemingly relying on her faith to cope with the death of her husband.

The 60-year-old model's music legend husband lost his 18-month battle with cancer and passed away at the age of 69 surrounded by his family.

Iman is yet to publicly comment of the death of David but she cryptically posted on Twitter yesterday.

The Somali-born beauty also made a sad post on January 9 - the day after her late spouse's birthday. 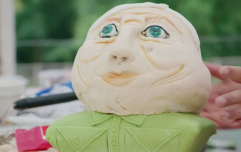 END_OF_DOCUMENT_TOKEN_TO_BE_REPLACED

Iman and David married in April 1992 in a private ceremony in Lausanne, and the wedding was later solemnised in June in Florence, Italy.

They had a daughter, 15-year-old Alexandria Zahra Jones, together and she also acted as stepmother to his son Duncan Jones - whose mother is the musician's first wife Angie Bowie.

popular
British teen says she was raped in Majorca hotel by 'famous actor and musician'
Amber Heard is now being investigated for perjury
Supermarket cracks down on people breaking off broccoli stems to save money at the till
Bette Midler wants the US to ban Viagra because it’s ‘God’s will’ to have a ‘limp d**k’
Police hunt for two 'laughing' men who kissed three-year-old girl in front of distressed mum
Radio station plays 'Killing in the Name' non-stop from 6am after multiple staff get fired
Lewis Hamilton could be banned from British Grand Prix
You may also like
Music
Les Misérables star cast as David Bowie in new biopic
Entertainment
A huge David Bowie celebration is coming to London
Music
James Bay says he's not bothered that people always ask about his hat
Music
JOE's guide to the perfect international travel playlist
Music
The JOE Music Quiz: Week 8
Next Page