It's the question on every Peaky Blinder fan's mind

It's no secret that Thomas Shelby loves a cig. What's more, is that he is quite possibly the sexiest fictional smoker of all time.

Given these two facts, it is no surprise that Peaky Blinders fans are simply dying to know the thinking behind the weird thing he does before lighting up.

sexual orientation: Thomas Shelby rubbing a cigarette on his lower lip before trapping it between them.

The character has quit drinking in the latest series, which started this month - but if anything, his lack of boozing has only put further emphasis on his other addiction. 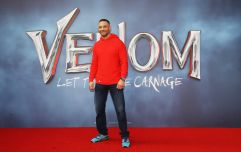 Tom Hardy is the most difficult actor to understand for American viewers, study finds

END_OF_DOCUMENT_TOKEN_TO_BE_REPLACED

Only hardcore fans of the show will have noticed that Shelby, played by Cillian Murphy, famously draws a cigarette from his pack, and rubs it across his lower lips before smoking it.

And for years, hardcore fans have been desperate to know exactly why he does this.

Thomas Shelby: rubs the cigarette on his lips twice before lighting it*

Thankfully, the actor himself has come out and revealed the exact reason behind this strangely seductive smoking habit.

Murphy told to BBC that it's all to do with the filters, and getting sticky...

"That comes from the fact that the cigarettes, we cut the filter off, or do we leave them on? I can't remember... but if you don't rub them across your lips initially, it will stick. That just became this sort of idiosyncrasy, but it was out of necessity, because otherwise the cigarettes would stick to my lip. And then I just kept doing it and it became a Tommy thing.

"These things develop over the course of the show, you know?"

The actor then explained how the cast and crew got through the first two series of Peaky Blinders before realising that we'd never seen Tommy eat before.

"So then we made it a kind of running gag," Murphy said, "Throughout the 36 hours of television, Thomas Shelby never consumes anything. Except I think, once he consumes a sprig of mint when he's with his son.

"So these things develop, when you have the luxury of being with a character for so long, these little things arise."

While the chain smoking is key to his character, Thomas Shelby wouldn't be Thomas Shelby without his iconic haircuts - and Murphy also revealed that in series five, when his haircut was the most intense ("a zero blade"), his fresh trim needed a lot of TLC to stay fresh.

"That required daily attention," he revealed.

"Growing it out is traumatic, you know, because it doesn't look good," he added.