Chris Rock's younger brother Kenny has said he wants to fight Will Smith.

END_OF_DOCUMENT_TOKEN_TO_BE_REPLACED

Kenny spoke out on Wednesday, weeks after Smith slapped his big bro at the Oscars after the comedian made a joke about the actor's wife, Jada Pinkett Smith. Rock made a 'G.I Jane' jag at Jada's expense. She has alopecia.

Smith, who won an Oscar for his performance in King Richard, has since apologised and resigned from the Academy. He has also been banned from the Oscars for 10 years.

Kenny told TMZ that he had signed a deal with Celebrity Boxing founder Damon Feldman for a fight in Florida later this year and was "most definitely" excited about getting into the ring.

Kenny's opponent is yet to be confirmed, but when asked who he would like to get into the ring with, he said: "Any and everybody. Anybody willing to step up and take on the challenge."

END_OF_DOCUMENT_TOKEN_TO_BE_REPLACED

He was also asked if he thinks his brother and Smith should settle their differences in the ring.

"No they shouldn't, but I should get in the ring with Will Smith," Kenny said.

He added that his brother was "doing great" after the slap and expressed scepticism over the Academy banning Smith from the event for a decade.

Speaking to the Los Angeles Times, Kenny also said he'd like to see Smith stripped of his first-ever Oscar, saying: "It eats at me watching it over and over again because you've seen a loved one being attacked and there's nothing you can do about it." 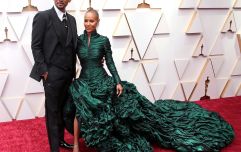 END_OF_DOCUMENT_TOKEN_TO_BE_REPLACED

Kenny added: "My brother was no threat to him and you just had no respect for him at that moment. You just belittled him in front of millions of people that watch the show."

Kenny believes his brother's joke was "was funny".

"It wasn’t hilarious funny, but I know that if he knew that she had alopecia… he wouldn’t make a joke about that. But he didn’t know."

Rock's other brother Tony has yet to accept Smith's apology, and recently slammed the actor at his comedy show.

He reportedly told the audience: "You gonna hit my motherf***ing brother because your b***h gave you a side-eye?"