Blue Planet II introduced everyone to a new underwater nightmare

This week's episode focused on life at a coral reef, and essentially became Finding Nemo made real. 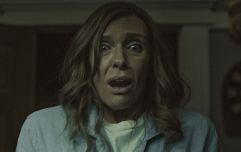 END_OF_DOCUMENT_TOKEN_TO_BE_REPLACED

But no, it came down to that nasty Bobbit fish, which hung around just under the bottom of the reef, hiding just out of sight, waiting for some unsuspecting victim to wander by...

... and then BAM! Like something out of a slasher movie, the Bobbit would pop out and devour the victim in one chomp, and that was that.

Everyone watching had the exact same reaction, one that had the neighbours severely worried about their well-being...

Me every Sunday between 8-9pm watching Blue Planet 2 #BluePlanet2 pic.twitter.com/3MAK0R8jfL

popular
KFC themed hotel opens in UK with free chicken delivered to your room
Tokyo 2020: Footballer guaranteed to be first trans and non-binary athlete to win Olympic medal
This is how Team GB is doing at Tokyo compared to Rio and London
Harry Kane's attempt to leave Spurs takes entirely predictable fresh twist
Graphic WAP sign language interpreter is better than the actual song
Guy finds Aldi version of Hula Hoops in branded multipack
Michael Johnson shuts down Piers Morgan in Olympic medal debate
You may also like
News
WATCH: Rollercoaster stalls mid-twist, leaving dozens of people hanging upside down for hours
Life
Gigantic 'potentially hazardous' asteroid to hurtle past Earth
Uncategorized
The final trailer for Fincher's new serial killer Netflix series is here to creep you out
Entertainment
One scene in the new version of IT even managed to terrify Stephen King
Entertainment
Superb new serial killer TV show is being hailed as the 'best adaptation of a Stephen King novel'
Next Page