'Come out ye Black and Tans!'

Steve Coogan is the UK's most recognisable comedian, be it The Day Today and Alan Partridge or The Trip with Rob Brydon. 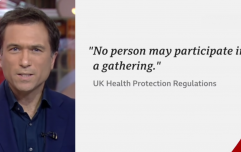 END_OF_DOCUMENT_TOKEN_TO_BE_REPLACED

He spoke to JOE about the retail industry's colossal impact on the environment and women, the BBC and its license fee and the future of Alan Partridge, GREED will be released in cinemas across the UK & Ireland on Friday, 21st February 2020.