END_OF_DOCUMENT_TOKEN_TO_BE_REPLACED

Alema is a neonatal nurse in the NHS and a mother of three. She also plays for Barnes RFC in south-west London.

She joined House of Rugby panel Lee McKenzie, Jonathan Davies and Séan O'Brien to discuss her route into the game, future aspirations and how she is managing playing and training throughout the month of Ramadan.

END_OF_DOCUMENT_TOKEN_TO_BE_REPLACED

Alema briefly played for a club side in Ealing before moving to university; where she first took rugby seriously.

She admitted she was the only non-white Muslim player that didn't drink alcohol.

"That was a culture shock, if I'm honest," Alema said. 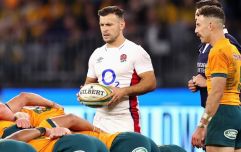 END_OF_DOCUMENT_TOKEN_TO_BE_REPLACED

Looking through the laws of rugby persuaded her to stay in the sport.

"It said there in black and white under the clothing section that you can wear a headscarf to play.

"And for me, it was such a relief because up until that time, I didn't feel like I belonged just because I didn't see anyone that looked like me."

Alema's progress throughout the month of Ramadan has been hampered slightly by injury.

"I've got a hamstring injury at the moment so I can't run anyway," she admitted.

"The number one question people ask is, 'Not even water?' Like, everyone asks that.

"During the month of Ramadan we don't eat or drink and people are really surprised that we don't even have water.

"You have to be careful and know your body. I train close to sunset, so I can break my fast and then sometimes I train after I break my fast. I don't do anything silly like going for a run during the day because that's not really advisable."

Alema is clear and forthright in her ambitions.

"I want to be the first black Muslim woman to play for England. I actually only decided that during lockdown."

She hopes her story will inspire a new generation of black and minority ethnic players to lace up their boots, pop in their gumshield and take to the field, particularly within the women's game.

As the Sunday Times Grassroots Sportswoman of the Year, Alema is encouraging others from marginalised backgrounds to join their local rugby club.

"I truly believe that if I get in that England shirt, I'm going to open up rugby to a new audience, people that I'm trying to reach out to to play rugby will then be thinking, 'Oh, look at Z, she's a black woman, she's wearing a hijab, she's playing rugby. Maybe I can give it a go.'"

Watch the latest episode of House of Rugby here

popular
Incredible case of the only known individual whose parents were two different species
TikTokers are utterly convinced there is a secret zombie apocalypse going on in China right now
Time traveller’ claims to know exact date Queen will die
Women need to be dating men 10 years older than them, says relationship coach
The Gambia tells UK grandmothers to find their toy boys from somewhere else
Darius Danesh opened up about his health struggles before his tragic death aged 41
Jealous man glued wife's vagina shut as he caught her cheating with four men
You may also like
Sport
Full England player ratings as Australia bullied in Brisbane
Sport
Danny Care and Marcus Smith start together in England team to face Australia
Sport
Danny Care and Billy Vunipola make 36-man England squad for Australia
Sport
Jack Clifford on 'Road to Twickenham' and starting over after devastating injury
Sport
Owen Farrell, Manu Tuilagi and 10 uncapped players in latest England squad
Next Page