Kamala was a familiar face to fans of WWE in the mid-1980s (back when it was known as WWF), most memorably challenging Hulk Hogan to a series of WWF Championship matches in late 1986 and early 1987. 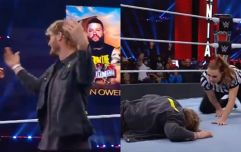 END_OF_DOCUMENT_TOKEN_TO_BE_REPLACED

The character of Kamala was one from a less enlightened era. Nicknamed 'The Ugandan Giant' and coming to the ring barefooted and wearing face paint, it has often been pointed to as an example of wrestling's problematic past, but the 6-foot-7, 380-pound Harris was able to make it into a long and successful career in the ring.

He made his debut in 1978 as "Sugar Bear" Harris, and wrestled in the UK and Germany as well as the US, before developing the Kamala character with the help of Jerry Lawler and Jerry Jarrett in 1982. Harris would keep up the gimmick by refusing to speak English in public.

In 1984, he would make his way to the WWF, being managed by Freddie Blassie and having memorable bouts with Hulk Hogan and Andre The Giant.

He would spend the rest of the late-1980s and early-1990s bouncing between WWF and various other promotions. In 1995 he would appear in WCW as part of the 'Dungeon of Doom', an assembly of bad guy wrestlers united to take down his old foe Hulk Hogan. As usual, Hogan dispatched them easily.

Kamala would make occasional appearances in WWE throughout the 2000s, giving the fans a fun hit of nostalgia, wrestling the likes of Randy Orton and Umaga. However, he suffered health problems in his later life, having a leg amputated in 2011 due to complications of high blood pressure and diabetes.

Tributes have flooded in from the world of professional wrestling, including tweets from Taz and Jerry Lawler, the man who helped develop the character Harris would be best known for.

Just been told that Kamala has passed away. pic.twitter.com/oBGnezmujn

A character that you created and a nice, nice man.


Sorry to hear a legend has passed. I had the pleasure of meeting Kamala couple of times always a tremendously nice man. #RIPKamala pic.twitter.com/4QgYJ2oMV6

WWE is saddened to learn that James Harris, known to WWE fans as Kamala, has passed away at age 70.https://t.co/d0kGY4GcTO

popular
Topless woman arrested outside Windsor Castle
A definitive ranking of every swear word from worst to best
Here's how to see who's been taking screenshots of your Instagram Stories
Police officer involved in killing of Breonna Taylor is writing a book about her death
Lidl weigh in on the Aldi and M&S beef over Colin the Caterpillar
The hardest Marvel Cinematic Universe quiz you'll ever take
The JOE Friday Pub Quiz: Week 239
You may also like
News
The Rock says he will run for President if people want him to
Entertainment
WWE Champion Bobby Lashley says he'd endorse The Rock for US President
Sport
Emotional night for old-school legend Edge at the WWE Royal Rumble
Entertainment
30 reasons why WWE's Royal Rumble is the greatest night of the year
Entertainment
Only proper wrestling nerds will get 100 per cent in this Royal Rumble quiz
Next Page