After France's World Cup final victory, Antoine Griezmann completed his media duties with a Uruguay flag draped around his shoulders. A bit strange to wear a different flag during a moment of such strong French national pride, right? Correct. But there is an explanation. 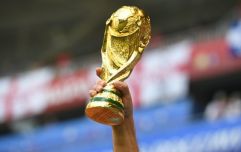 END_OF_DOCUMENT_TOKEN_TO_BE_REPLACED

After France had beaten Uruguay in the quarter-finals of this World Cup, Griezmann explained why he didn't celebrate his goal, of his respect for Uruguay, having learned a lot from coaches who hailed from the country and considering the fact that Uruguayan defenders form the backbone of the Atlético Madrid team.

"I didn't celebrate because when I started as a professional I was supported by a Uruguayan who taught me the good and the bad in football and I have a lot of respect for Uruguay," he explained. Luis Suárez, of course, did not care for his gesture.

This time, as Griezmann walked into the press room, a journalist from Uruguay handed the flag to France's talisman, who instantly wrapped it around himself, still donning his France kit.

France's 4-2 win over Croatia secured their second ever World Cup win. Speaking in the press conference, Griezmann didn't know how to mentally process the news.

"I still haven't fully understood what it means to be a world champion," he said.

"I'm very proud of all my teammates and the entire group. I'm looking forward to celebrating with all the fans back in France." 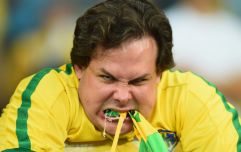 END_OF_DOCUMENT_TOKEN_TO_BE_REPLACED

The France squad as one of the youngest at the tournament, but what it lacked in experience it made up for in talent.

"We are a young group with a great future," Griezmann said.

"The most important thing is that we have a great time together as a group.

"We have a good atmosphere, nobody gets angry, the coach has done a fantastic job."